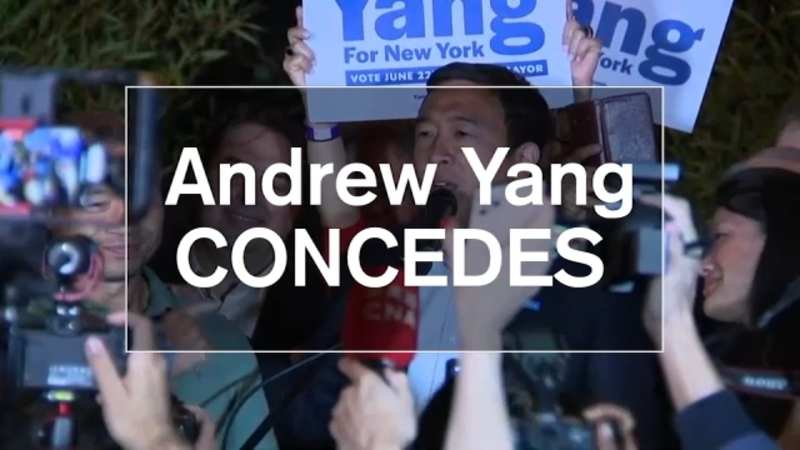 NEW YORK (WABC) -- The race for New York City mayor remains up in the air this morning, as the ballot counting from the city's ranked-choice primary election continues.

With first-place votes tallied from the first 900,000 ballots, Brooklyn Borough President Eric Adams has emerged as the clear favorite.

Turnout in Tuesday's Democratic primary for mayor has already surpassed the total in the last competitive primary in the city back in 2013 - and at least 90,000 absentee ballots still need to be counted.

In the Republican mayoral primary, Guardian Angels founder Curtis Sliwa cruised to a decisive victory over Fernando Mateo, with over 70 percent of the vote.

Just who Sliwa will face in the general election may be unknown for weeks, because of how ranked choice voting works.

Andrew Yang concedes
Andrew Yang has conceded in the race for NYC mayor. He said he vows to continue working alongside with whoever ends up winning the race. He said he and his wife will continue to find a way to contribute to life in NYC in whatever way they can.

"And I'm just so grateful to everyone who has given us the chance to make this campaign as impactful as it's been and something that I am so proud to have led over the last number of months," Yang old his supporters. "Thank you, everyone."

Republican nominee for Mayor
Guardian Angels founder Curtis Sliwa is the projected winner of Republican mayoral primary. Flanked by Giuliani at his victory party, Sliwa promised a general election campaign focused on crime. "This is going to be a campaign clearly in which I talk about cracking down on crime, supporting the police, refunding our heroes the police, hiring more police, taking the handcuffs off the police and putting it on the criminals, and restoring qualified immunity to the police so that they can't be personally sued," he said.

Early leaders in the polls
Based on unofficial first-choice results from in-person voting, as of 10 p.m. on primary night, the leaders in the Democratic mayoral race were Adams, Garcia and Wiley. Click here for more results.

When will we know the official results?
The NYC Board of Elections provided the latest guidance regarding unofficial election results:

Polls are officially closed! Thanks to everyone who voted. Here is an important note regarding unofficial election results! Visit https://t.co/y3JRuS6TiB for the unofficial results for 1st choice results from Early voting and Election Day pic.twitter.com/rYa3cK8f1W

The polls have closed
The polls closed at 9 p.m., and although official results may not be known for weeks, each of the leading candidates for mayor held primary night events on Tuesday. Eyewitness News had reporters at each of the candidates' headquarters.

Other key races
The mayoral race is getting the majority of the attention on primary day, but virtually every major city office is up for grabs.

Joe Torres reports on the other key races in New York City on Primary Day.

Democrats campaign on primary day
For Eric Adams, it was personal. Ending one chapter in his life, hoping to write yet another as he voted with his family in Bedford-Stuyvesant. Adams had been planning a mayoral run for years and this was an emotional moment-invoking the memory of his upbringing and the challenges his late mother faced.

But with ranked choice voting, the outcome is far from guaranteed. Andrew Yang cautioned New Yorkers against expecting an immediate result, as he campaigned in The Bronx.

In a bold, strategic move, Yang has campaigned at times with former city sanitation Commissioner, Kathryn Garcia. She greeted her former workers at a sanitation garage in Upper Manhattan. And later campaigned on the Upper West Side.

Maya Wiley campaigned in the heart of Williamsburg this morning. Still struggling with her voice, but as confident as she has ever been.

Scott Stringer started the morning on the Upper West Side, while Ray McGuire was on the Upper East Side. And Shaun Donovan voted along with his sons in Brooklyn.

Absentee ballots
More than 87,000 absentee ballots had been received by the city as of Monday, with more expected to arrive in the mail over the next few days.

When will we know who wins NYC's mayoral primary?
New York City has instituted ranked choice voting for Tuesday's primary vote to determine the candidates in the race for mayor. But how long will it take for the results to be tabulated? It might take until July.

The two leading Republicans are Fernando Mateo and Curtis Sliwa.

Most recent polls have suggested that Brooklyn Borough President Eric Adams is the favorite, getting ranked first by a little less than a quarter of likely voters. Other top contenders include civil rights lawyer Maya Wiley, former city sanitation commissioner Kathryn Garcia and former presidential candidate Andrew Yang, who have been polling between 6 and 12 points behind.
What is ranked choice voting?

What other races are on the ballot?
New York City is also using the system in primaries for other municipal offices including city comptroller, borough president, and City Council. There is also a Democratic primary for Manhattan district attorney, but that race will not be decided by ranked choice voting since it is a state office, not a city office.

Watch the first in-person NYC mayoral debate
WABC-TV hosted the second debate for the New York City mayoral race and the first to take place in person earlier in June.

Click here for a recap of what the candidates had to say.
EMBED More News Videos