Food delivery worker shot to death while on scooter in Queens 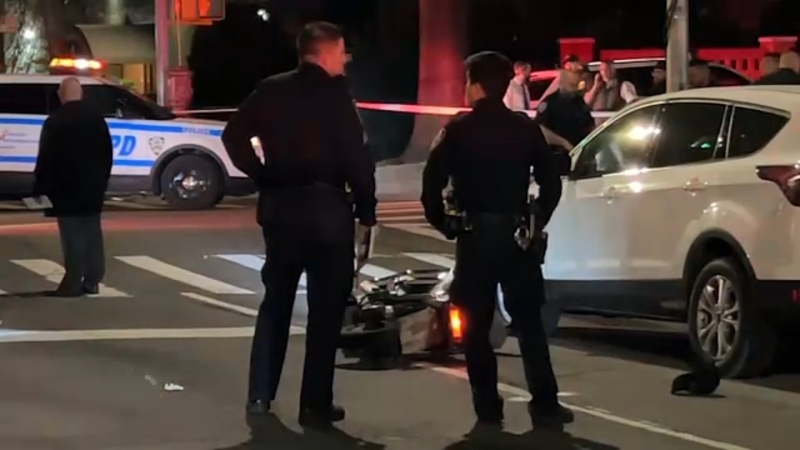 Food deliveryman shot to death while on scooter in Queens

FOREST HILLS, Queens (WABC) -- A family is left grieving Sunday morning after a man was shot and killed while making deliveries.

Forty-five-year-old Zhiwen Yan worked at a Queens Chinese restaurant called 'The Great Wall' and was making deliveries on his scooter Saturday as usual.

But after finishing a delivery in Forest Hills around 9:30 p.m. Yan was shot in the chest.

Video shows Yan pulling onto 108th Street when someone approaches on foot with a gun drawn.

Yan tries to roll backward on the bike to get away, but the suspect shoots sending the scooter toppling to the ground.

He was later pronounced dead at Elmhurst Hospital.

"Somebody, somebody killed my husband, catch him, catch him," Yan's wife Kunying Zhao said through tears.

Zhao spoke to Eyewitness News Sunday morning with her young daughter playing nearby.

It's unknown if the victim was being targeted. Authorities said the shooter fired several times then got in a gray or tan sedan and fled eastbound on 67th Drive.

Police are hoping to gather surveillance footage that shows the sedan the suspect fled in after the incident.

Neighbors woke up shaken on Sunday.

"We've never had anything like this at all, I am absolutely shocked, my wife called me down to move the car and said there's a crime scene down here," a witness said. "This is not right. This is not our neighborhood."

No arrests have been made. An investigation is underway.

This act of senseless violence happened less than 24 hours after Mayor Adams met with top police officials to come up with a plan to combat violent crimes.