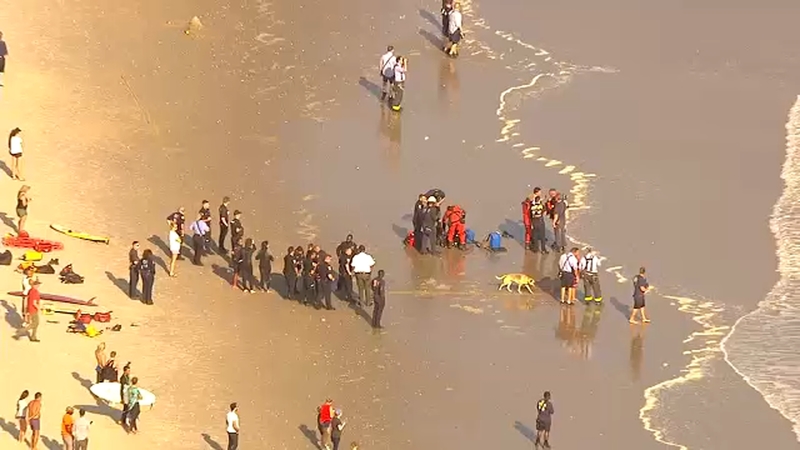 ROCKAWAY BEACH, Queens (WABC) -- Search efforts were suspended for the evening Wednesday night after three teenagers were reported missing in the water near Rockaway Beach in Queens Tuesday.

Witnesses told police they saw the swimmers go into the water, but they never came out.

Delsea Flowers, the aunt of one of the missing teens, came to the beach Tuesday night.

"Drawn here to look, see if he's OK, if he's out there, if he's hanging onto something," she said.

There were no lifeguards on duty at the time.

"I was actually crying before I came here, because my son knows him very well," said Ahmad Kaoyode, whose son is the other teen's best friend.

Surfers at Rockaway Beach were sure they heard something above the sound of the surf.

"Like a very panicky stressed call for help, and we weren't sure, are they saying, 'Help'?" surfer Liz Winer said. "So we paddled over, and we saw his head above water. And he looked really scared, and he was being pulled further and further out."

Police say the three teens went for a swim on their day off from school, but the stiff rip currents carried them out.

"Four of us came together to try to help bring him to shore, and you can tell from the conditions you shouldn't be out there unless you can swim and make sure you can get yourself to safety," another surfer said. "It was really scary, and you could tell he was very scared and he kept saying, 'My friend, my friend.' We didn't see anybody else. We looked, we didn't see anyone."

Rescuers from fire, police and the Coast Guard all rushed to find the missing swimmers, but the surf was too strong and dangerous even for them. Police eventually pulled all the divers out of the water due to unsafe water conditions.

"They had them in the water on the ropes," Rockaway Beach resident Eddy Pastore said. "They were walking waist high in the water, and someone was on shore with a rope making sure they weren't pulled out because it's really really dangerous. The rip currents are incredible."

"I don't even know why they went in the water, those waves look crazy, they look vicious," said Ty Thompson, cousin of one of the victims.

She says her cousin likely drowned trying to save his friend, who could not swim. "I guess they were playing and then the waves took them, but the boy who couldn't swim, he couldn't save himself," said Thompson.

"We're facing unusual heat for this time of year," de Blasio said. "In response, we are deploying extra patrols to ensure a swift response in case of emergency, but it's critical that all New Yorkers put their safety first and stay out of the water at our beaches."

Twelve additional officers have been assigned to the boardwalk and to patrol the beaches at Rockaway Beach, and an FDNY harbor boat will patrol the waters by the Rockaways along with a Rapid Response Vehicle that will patrol the shores with members trained to make cold water rescues. EMS units will be on scene to treat anyone in need.

The NYPD will also deploy additional officers and harbor search and rescue teams to patrol the beaches.

All beaches are closed to swimming after the outdoor swimming season ended September 8, and as such, there are no lifeguards on duty at city beaches. Signage warning visitors to only swim when lifeguards are on duty is posted at entryways of all beaches.

Officials say New Yorkers should adhere to all signage and instructions from officials for their own safety, and call 911 for beach emergencies.