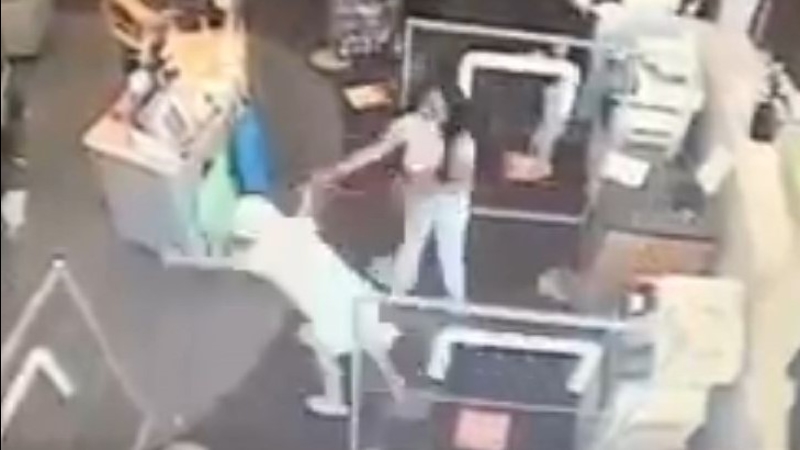 HACKENSACK, New Jersey (WABC) -- The suspect accused of assaulting a 54-year-old woman inside a New Jersey Staples store has been arrested.

A woman attacked a 54-year-old in a Hackensack Staples after being told to put a mask on, police say

The Hackensack Police Department announced Tuesday, the arrest of 25-year-old Terri Thomas, who was wanted in the shocking attack of a 54-year-old woman who recently had a liver transplant.

"Detectives Demetrius Carroll, Ioannis Papanikolaou, and James Han, in particular, all did a fantastic job," Detective Captain Darrin DeWitt said. "I also thank the Hackensack Staples store and the Staples corporate office for their cooperation, which was crucial in solving the case."

Police say the victim, Margot Kagan, was using the fax/copy machine when another woman approached to use a nearby machine with her own mask pulled below her mouth.

The victim told her to wear her mask, and the suspect became angry and started yelling.

Surveillance video shows Thomas violently throw the victim to the ground, and then leave the store.

Kagan says she broke her knee, which required a steel plate to be put in and has been told by doctors that she won't be able to put weight on her leg for seven to 10 weeks.

Speaking from her hospital bed, the woman shoved to the ground inside a Staples in New Jersey after she asked another customer to pull up her face mask says she plans on pressing c

She was released on a summons pending a court appearance on August 24.

Hackensack police encourages anyone who witnesses a crime or has information about one to reach out to CrimeStoppers of Bergenfield, Englewood, Teaneck, Hackensack, and Bogota, which offers cash rewards of up to $1,000. Tips can be made anonymously at www.bergencrimestoppers.org or by calling 844-466-6789, 24 hours a day, seven days a week.