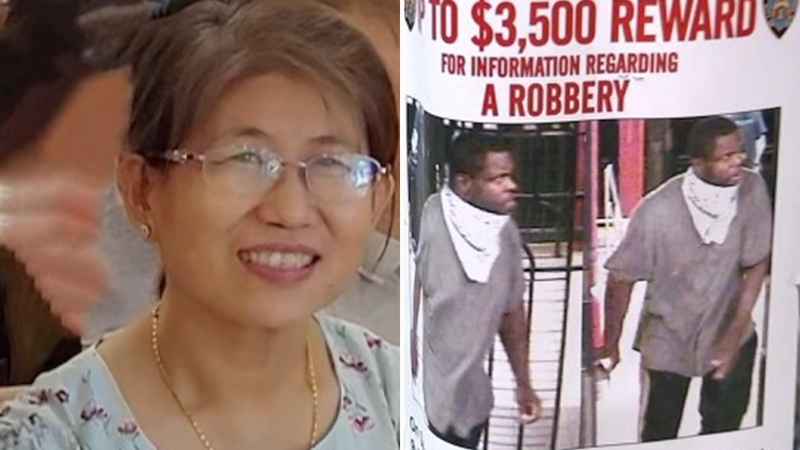 Mom dies after fall down subway stairs during attempted robbery

CHINATOWN, Manhattan (WABC) -- A woman who has been in a coma ever since she fell down the subway stairs during an attempted robbery has died and now police have identified the man they are looking for.

Than Wtwe Than had been in the hospital since the incident at the Canal Street station on July 17.

Her family made the impossible decision Wednesday to take her off life support.

Police say the 58-year-old victim was with her 22-year-old son walking up the subway stairs when a thief grabbed his backpack and knocked him down.

The force of the grab sent both mother and son tumbling down the stairs.

Her son, Kyaw Zaw Hein, said he frantically yelled for help and there was a lot of blood.

Than, who worked as a seamstress making aprons, suffered a severe brain injury.

Police are still searching for the man they believe escaped into the subway system after the attack.

He was identified Wednesday as 52-year-old David Robinson. A $3,500 reward is being offered for information that leads to his arrest.

It's not yet clear if any words were exchanged or if the victims were targeted because of their race.

They are from Burma and moved to New York City three years ago.

Her son told Eyewitness News last week that he now fears for his safety and is afraid to ride the subway.

"She meant the world to me," Hein said.

Now subway safety advocate Charlton D'Souza is demanding better policing in the subway, even though earlier this summer, the MTA said an alarming surge in crime had leveled off.

"You know the criminals are getting more and more bolder and what's sad about this death is we were all told there was gonna be a huge deployment in the subway," DSouza said. "Well guess what? Here it is, we are today, there's no police officers down there."

The MTA released the following statement:

"Our hearts go out to the family and loved ones of Than Wtwe Than. No one should have to suffer such a senseless and depraved attack. We agree there should be additional policing and additional security cameras in the subway system - which is why we have been so aggressive in efforts on both fronts. New York City Transit has accelerated installation of cameras in the subways at a historic pace, with cameras expected in every station by end of summer. For this specific incident, we are grateful our cameras captured the perpetrator, significantly aiding the NYPD investigation."