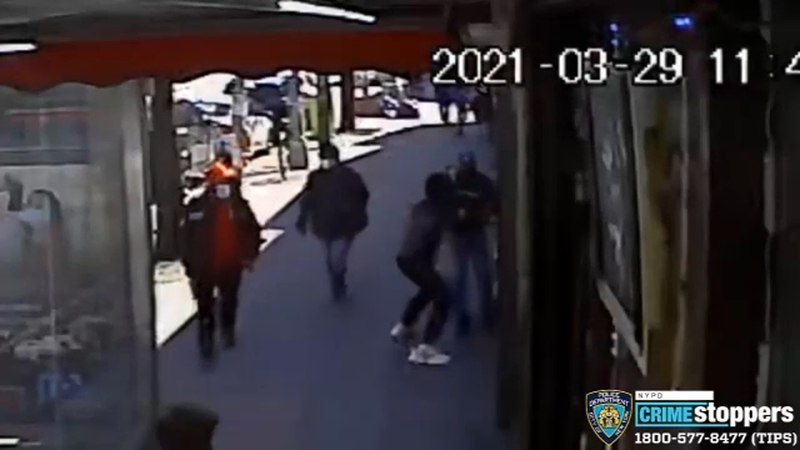 The attacker sucker-punched a 61-year-old man in the face, knocking him out.

It happened Monday at 11:45 a.m. on East Burnside Avenue in University Heights.

The victim was treated at St. Barnabas Hospital for a cut to his lip and swelling to his head.

Police say the suspect took off on a BX40 bus.

It comes as the NYPD is seeing an increase of random unprovoked attacks.

Thursday, a couple and their 1-year-old son were slashed by a man on State Street near the Staten Island Ferry.

Police arrested 30-year-old Darryl Jones who was just released from prison after spending nine years behind bars for an August 2011 robbery and attack in Harlem.

"While he was incarcerated he broke a court officer's wrist and was resentenced in jail for other offenses. This is who we are putting back onto the street, and within a month he's stabbing a 1-year-old child in a stroller. I can't tell you have angry I am about this," Police Commissioner Dermot Shea said.

It follows the arrest of 38-year-old Brandon Elliot, who is charged with assault as a hate crime, for an unprovoked attack on a 65-year-old woman walking to church in Midtown.

Elliot served 17 years in prison for murdering his mother in 2002.

He was released 16 months ago on lifetime parole.

"We have to be compassionate, we have to help people, but we also can't forget the people that live and work and come to New York City to enjoy everything it offers," Shea said. "And you can't be putting people onto the street and having them victimize New Yorkers without consequences."