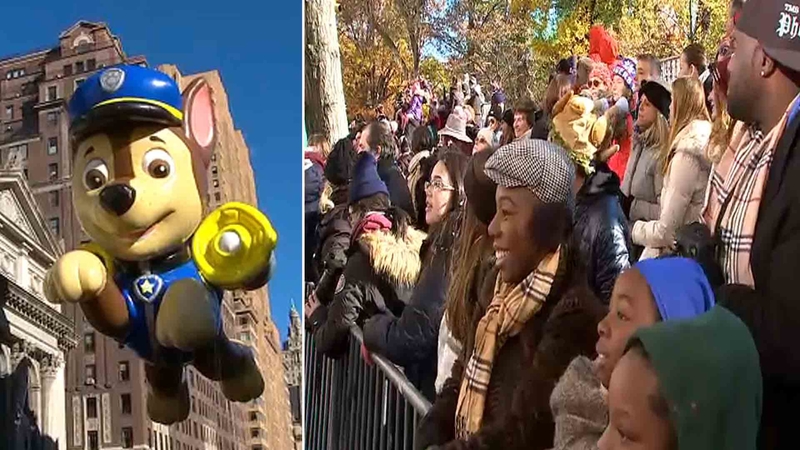 UPPER WEST SIDE, Manhattan (WABC) -- Security will be tight for the 2018 Macy's Thanksgiving Day Parade and Balloon Inflation.

While federal and local law enforcement agencies know of "no information to indicate a specific, credible threat" to either event, authorities remain on alert.

RELATED: All about this year's parade and balloon event

According to the joint threat assessment prepared by the FBI, Department of Homeland Security and NYPD, officials "remain concerned about unaffiliated lone offenders."

"Our job is to offer maximum protection against any type of incident but it's also to make sure we don't protect it to the point that it's not fun, so our people will be as accommodating as possible," said NYPD Deputy Commissioner of Intelligence and Counterterrorism John Miller.

The dogs are specially trained to sniff out explosives along a route lined with 3.5 million spectators. Chief of Counterterrorism James Waters said they are trained to track a scent at a greater distance.

The NYPD began working with the dogs last winter to make sure they could operate effectively in New York. The dogs are in addition to the usual security measures for a large scale event: hand wand of spectators, thousands of officers, rooftop patrols, blocker vehicles at intersections.

"This is going to be a safe place to be," Police Commissioner James O'Neill said.

As for the weather and the balloons, police will determine whether the balloons can fly at full height depending on wind speed.

The 16 giant character balloons cannot fly at all if there are sustained winds of 23 miles per hour or gusts in excess of 34 miles per hour. Each balloon has a supervisor who works with police to determine whether wind speed will allow the characters to soar and at what height.

Among the new giant balloons this year are Goku from "Dragon Ball Super: Broly"; Fleck, Bjorn, Jojo and Hugg, the elf starts of "The Christmas Chronicles" on Netflix; and Little Cloud by FriendsWithYou.