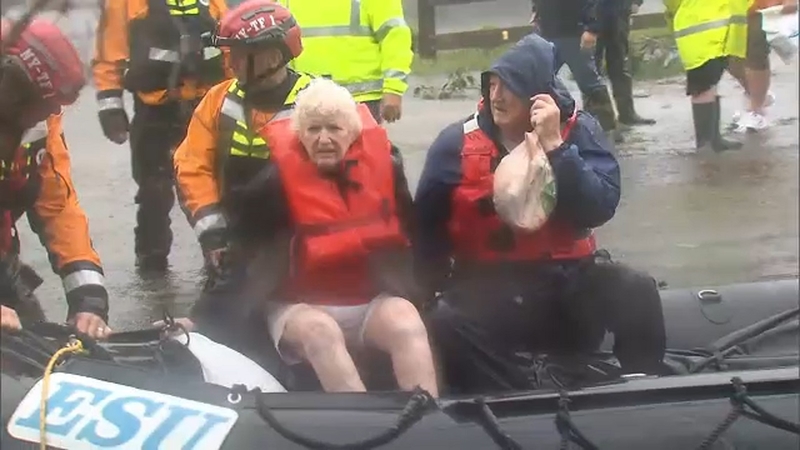 FLUSHING, Queens (WABC) -- A group of rescuers from New York City who were deployed to the Carolinas during Hurricane Florence received a warm welcome home Wednesday.

They left their families for two weeks, risking their own lives to save others.

"They're a little confused at first, when they see and they hear guys from New York City coming and pulling them out of their houses," NYPD ESU Detective Dennis O'Sullivan said.

The look of confusion and fear was typically replaced with that of relief, gratitude the members of the NYPD and FDNY got over and over again when they were asked by FEMA to help out in North Carolina.

The rescues were conducted by members of the elite New York Task Force One unit. There were two separate deployment, as 83 members left on September 11 and another 18 members departed two days later. They took equipment for collapsed structures, rope for confined rescues and, most importantly, two rescue boats that saved those stranded in the flood waters.

"They did a rescue of a guy that was hanging on a tree overnight for six hours," Captain Thomas Traynor said.

"Hypothermia was kind of setting in for them," O'Sullivan said. "We were able to talk them threw getting into the boat, putting flotation devices on them, pull them and bring them back to our medical staff that was waiting."

The teams were recognized for their heroism in Flushing, Queens.

"It was a really good opportunity we had down there to help somebody out," Detective Mike Cacace said.

There are only 28 of these rescue teams nationwide that work under the direction of FEMA. They are always ready to deploy within hours to help out with disasters in the U.S. and abroad.