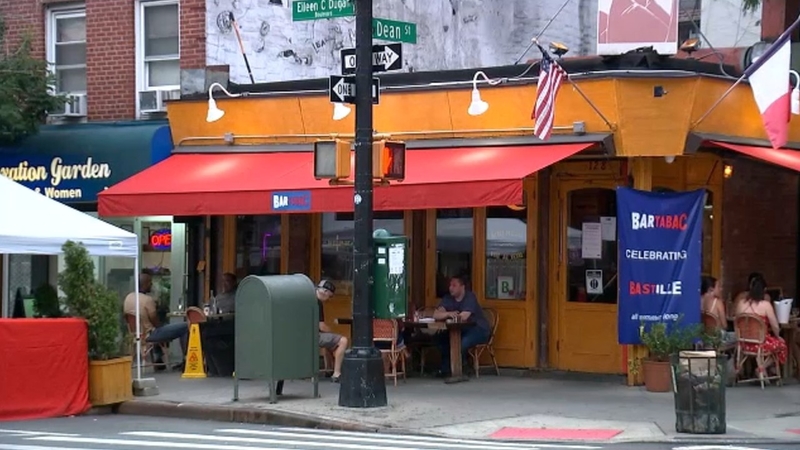 On Monday, police and the State Liquor Authority conducted 945 compliance checks and found violations at 27 establishments.

In total, 94 liquor licenses have now been suspended during the pandemic. Nearly 20 other bars received violations over the weekend.

"New Yorkers crushed the curve of the virus and their actions have allowed us to maintain a low infection rate throughout our reopening, but we must continue to be smart and cautious, especially as we watch cases rise throughout the rest of the country," Governor Cuomo said. "While I commend the vast majority of bar and restaurant owners who have taken extraordinary precautions and remained vigilant during this crisis, our top priority is protecting public health and the taskforce remains laser focused on holding accountable those who willfully violate the law."

The 11 establishments issued emergency orders of summary suspension from the State Liquor Authority Board on Aug. 3 and Aug. 4 include:

"Suite 704" at 704-706A Nostrand Avenue in Brooklyn, on August 4, 2020
On August 1st NYPD officers observed twelve patrons eating inside the premises, employees without facial coverings, and a DJ set up inside, in violation of their license and the Governor's Executive Orders which do not permit inside service at all in NYC.

"Burkes Grill" at 7 South Avenue in Webster, on August 4, 2020
On July 30th, SLA investigators made an undisclosed visit to this restaurant to find it operating as an illegal bar only: observing twelve patrons at the bar who were ignoring social distancing guidelines and two patrons standing and drinking. An investigator ordered and was served a beer without food from a bartender without a facial covering, while observing three patrons enter the bar that were also served alcohol without food.

"Sirenita Lounge" at 12 Croton Avenue in Ossining, on August 4, 2020
The SLA received a referral from the Village of Ossining Police Department that on July 31st, officers conducting a compliance inspection observed a bar-type scene inside with patrons drinking, playing pool and mingling inside without masks and ignoring social distancing guidelines; several patrons were also loitering and drinking directly outside of the establishment.

"Boxcar Lounge," at 168 Avenue B in Manhattan, on August 4, 2020
On August 3rd, investigators with the state's multi-agency task force interviewed the owner of the business, who admitted to serving alcohol to patrons without food, in addition to acknowledging the business does not have a kitchen or prepare food, which has been a requirement of all licensed taverns dating back to 1964. The licensee previously had been cited and disciplined, in 2019, a "non bona fide" for having no food available.

"La Vue" at 3202 Emmons Avenue in Brooklyn, on August 3, 2020
On August 2nd, investigators with the state's multi-agency task force observed multiple egregious violations at this licensed premises: five security guards and two valets without facial coverings directly outside the business, six employees preparing food and three bartenders without facial coverings, forty patrons without masks inside, near the rooftop, and one-hundred-fifty patrons drinking and dancing on the rooftop, with several observed sharing hookah and drinks from bottle service being offered.

"EL Manaba Restaurant" at 341 St. Nicholas Avenue in Ridgewood, on August 3, 2020
On August 2nd, investigators with the state's multi-agency task force observed eleven patrons inside the restaurant eating and consuming alcohol, including seven seated at tables and four at the bar, all of it illegal in New York City. Investigators additionally observed four employees inside the restaurant without facial coverings.

"Crush Bar and Lounge" at 10 West Mount Eden Avenue in the Bronx, on August 3, 2020
On August 2nd, investigators with the state's multi-agency task force observed a DJ playing music outside the premises creating a nightclub-like atmosphere with over twenty-five patrons, most without facial coverings, partying, mingling and drinking.

"Kazan Mangal" at 97-13 Queens Boulevard in Queens, on August 3, 2020
On August 2nd, investigators with the state's multi-agency task force observed four patrons eating and drinking inside the restaurant. Kazan Mangal already was charged for allowing patrons to eat inside on July 26th.

"Shanghai Red" at 127-129 Westchester Square in the Bronx, on August 3, 2020
On August 2nd, investigators with the state's multi-agency task force observed three patrons eating and drinking inside the premises, including two at the bar. Directly outside the bar investigators observed several patrons standing, drinking and ignoring social distancing guidelines in addition to a server without a facial covering.

"The Greek Kitchen" at 885 10th Avenue in Manhattan, on August 3, 2020
Based on complaints of patrons eating inside the premises, on August 2nd, investigators with the state's multi-agency task force observed several patrons dining inside.