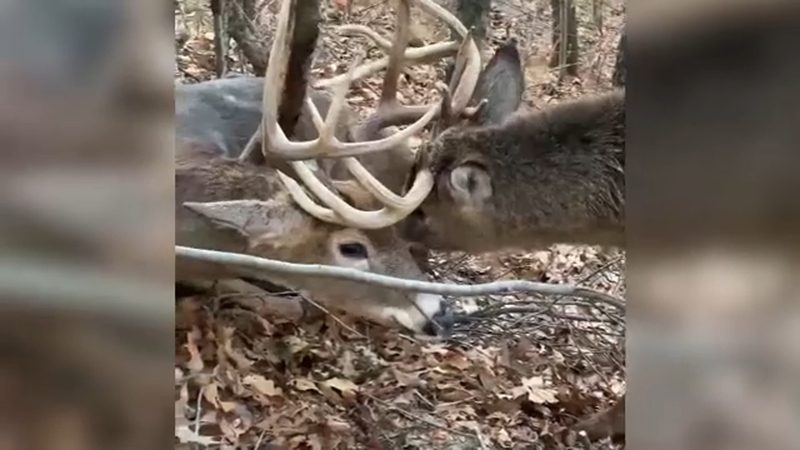 LA CROSSE-EAU CLAIRE, Wis. -- Some hunters in rural Wisconsin are earning internet fans for deciding to save two animals instead of killing them.

Video of how they helped two bucks tangled together has racked up more than 20-million views.

On December 20, Everett Sluga was on a casual drive and spotted something he'd never seen in person before.

"I got to where we're standing right now and I thought that I saw a back of a deer," Sluga recalled. "And I turned around and I couldn't understand why that deer didn't move, and when I turned around, I saw there was two bucks locked up."

Two white-tailed buck had their racks stuck together and could not break free.

Sluga let the owners of the farmland know.

"They were in the creek down here, and she actually jumped them up and they got out in the CRP field, and then there -- I told her right away there was no saving them in the field. We had to get them in the woods," said Troy Rebarchek, the landowner. "So we kind of made a little drive, and we got them in woods, which is where, you know, they kind of got locked down. They couldn't move, which is where we saved their lives."

Rebarchek and his wife, Tammy, are hunters themselves, but decided not to harvest the deer even though it was still hunting season, WEAU reported.

"I just didn't feel it was right shooting them in the situation they were in," Rebarchek said. "It just didn't feel ethical to me, and, and I actually had my bow on, and I pulled back on them, and I looked at Tammy and said, 'I can't shoot these deer.'"

Instead, Rebarchek grabbed his Milwaukee grinder out the back of his truck. He cut off one antler off each buck to set them free.

"It's the only tool I had in my truck. It isn't the right tool for the job, but we didn't have time. I just, you know, I feared for both the deer's death," Rebarchek said.

In the spirit of a fair chase, Jon King with the Wisconsin Department of Natural Resources praised Rebarchek's actions.

"This guy allowed them to enjoy a little bit of life and participate in an ethic and responsible way as a hunter, so I'm happy that he did this," King said. "It's a good story, and good to see and hear."

If he had to do it all over again, Rebarchek said he wouldn't change a thing.

"I'm a 100% positive we made the right decision by saving them rather than shooting them," Sluga said.