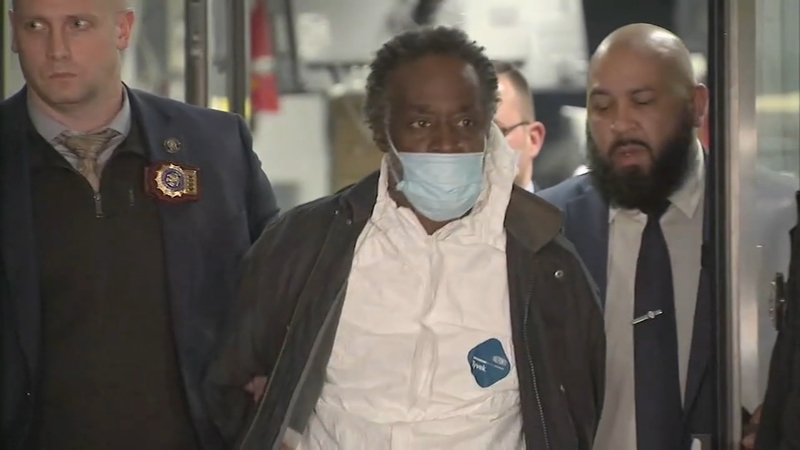 TIMES SQUARE, Manhattan (WABC) -- Simon Martial, accused of killing Michelle Go after shoving her in front of an oncoming train, has been found unfit to stand trial, according to the Manhattan District Attorney's Office.

A judge adjourned the case until April 19.

Back in January hundreds of people gathered in Times Square to honor Go.

Featured video is from previous coverage of vigil

Go's horrific death stands as a brutal indictment on the city she loved and served.

Her larger-than-life portrait smiled over the vigil, alongside other Asian victims.

"Michelle, we will miss you deeply. Know you will always be in our hearts and memories," work friend Louise Chang said at the vigil.

The attack happened just after early on January 15 inside the Times Square-42nd Street subway station.

Go was struck and killed in the apparently random attack. Officials do not believe the attack was a hate crime, but even so, assaults on Asians have skyrocketed.

Martial has a history of mental illness and is undergoing a psychiatric evaluation.

"I'm re-committed to make sure this will not happen in our city. We have to do this together," New York City Mayor Eric Adams said.

The mayor has come under fire for his initial response to the killing. Accused of being tone-deaf to the cries of the city.

"We will hold them accountable. The safety of New Yorkers is a human right," Asian Fighting Injustice founder Ben Wei said.

However, just days after Go was killed, Adams made a stunning admission about the city's transit system.
"We're going to make sure New Yorkers feel safe in our subway system. And they don't feel that way now," Adams said. "I don't feel that way when I take the train every day, or when I'm moving throughout our transportation system."

Go was an Upper West Side resident who worked as a consultant for Deloitte. And volunteered with the New York Junior League helping the homeless.

"She clearly had a very strong passion for working one-on-one with these populations in need," said New York Junior League President Dayna Cassidy. "She was a very compassionate soul who wanted to be rewarded by that direct impact and directly working with those individuals and watching them evolve over time."

The mayor's about-face on subway safety was welcome news to the man who runs the transit system.

"I think Mayor Adams is showing that he gets it, he gets how New Yorkers are feeling," Acting MTA Chairman Janno Lieber said. "He gets that even though, statistically, the chances of being the victim of a crime on the subway are very, very low -- and, God forbid, being a crime victim of a crime like the one that took place in Times Square. But New Yorkers also perceive a lack of safety because they are seeing and hearing about these extraordinary, alarming subway pushing episodes."

The incident happened less than two weeks after New York City Mayor Eric Adams and the New York Governor Kathy Hochul declared that homeless outreach and police presence would be stepped-up dramatically.
"She was a kind and generous person. She volunteered incessantly and worked hard to help others as she sought to make our city an even better place," Congresswoman Grace Meng said.