Bronx DA Darcel Clark to man who shot baby girl: 'You're not going to get away with it' 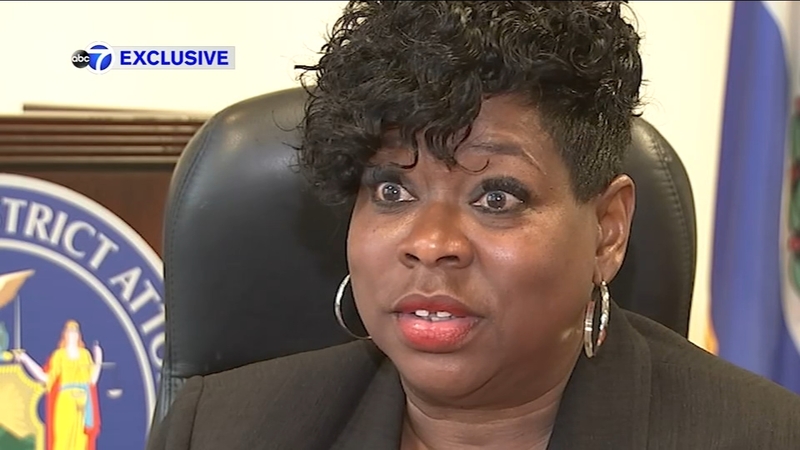 Bronx DA to man who shot baby: 'You're not going to get away with it'

BRONX, New York (WABC) -- Bronx District Attorney Darcel Clark is speaking out exclusively to Eyewitness News reporter NJ Burkett about the shooting of a baby girl who was struck by a stray bullet as she sat in a parked car with her mother.

Clark spoke directly to the gunman who fired the shot during a chase from Grand Concourse onto Valentine Avenue.

Police released new surveillance video showing the shooting, which happened while the 11-month-old girl's father had gone into a nearby deli Wednesday evening. The gunman can be seen running down the street in a chaotic scene.
EMBED More News Videos

Naveen Dhaliwal has more on the baby girl who was shot by a stray bullet in the Bronx.

"We're not going to stop looking," Clark said. "There are consequences when you do things, and I'm going to make sure that you're held accountable for the things and the harm that you do to the people in my county."

The mother called 911, and officers found her holding her baby outside of the car and quickly escorted the parents and ambulance to St. Barnabas. The baby was intubated and transferred to Weill-Cornell Medical Center, where she's in critical but stable condition.

The baby girl is turning 1 on Friday, and instead of celebrating her first birthday with her family, she's in a hospital recovering. Overnight, Mayor Eric Adams met with the parents.

The family did not want to speak publicly, but the girl's father told Eyewitness News reporter Naveen Dhaliwal that the family is doing the best as they can.

"This is very difficult and completely unacceptable in our city that an 11-month-old baby is shot," McCormack said. "Her birthday is in a few days. We were here last night with a police officer shot in the street. This is unacceptable and needs to stop."
EMBED More News Videos

Watch the full NYPD press conference after an 11-year-old child was shot in the Bronx.

Clark acknowledged that people feel helpless in what feels like an onslaught of violent crime.

"I don't want to think that, you know, we're at point of no return," she said. "We can turn this around. It's bad. I can't say, 'Well, you know, it's not as bad as everybody says.' It's bad, OK? People are dying. The Bronx is bleeding because people are dying from the shootings. We had 500 shootings in the Bronx last year. I had 146 homicides in the Bronx, overwhelmingly by guns. This is unsustainable, right? And we need help."

She added that various agencies are working together and that she is hopeful the tide will turn.

"All the things that should have been happening before, we're doing now," she said. "It's not going to happen overnight, but we're putting pieces together. We're putting together investigations that are phenomenal, and once we get them now, it's going to be able to stick because every agency is working together."

That collaboration is key, she said.

"We're not working in silos anymore," she said. "So we're going to see a change in the flow of the guns because ATF is working with us. We're going to make sure that the drugs that are coming in that causes violence. We're going to get a handle on because DEA is working with us along with NYPD and their task force, the state police, parole, probation. We're all together now because we have one common goal: to make the public safe."

Adams also held a briefing and delivered emotional remarks on the horrific incident and the recent surge in violent crimes plaguing the city.

New York City Mayor Eric Adams delivered emotional remarks after an 11-month-old infant was shot in the face in the Bronx Wednesday night.

The motive for this shooting still under investigation, and no arrests have been made.