Must-see movies this holiday season from Mary Poppins to Vice 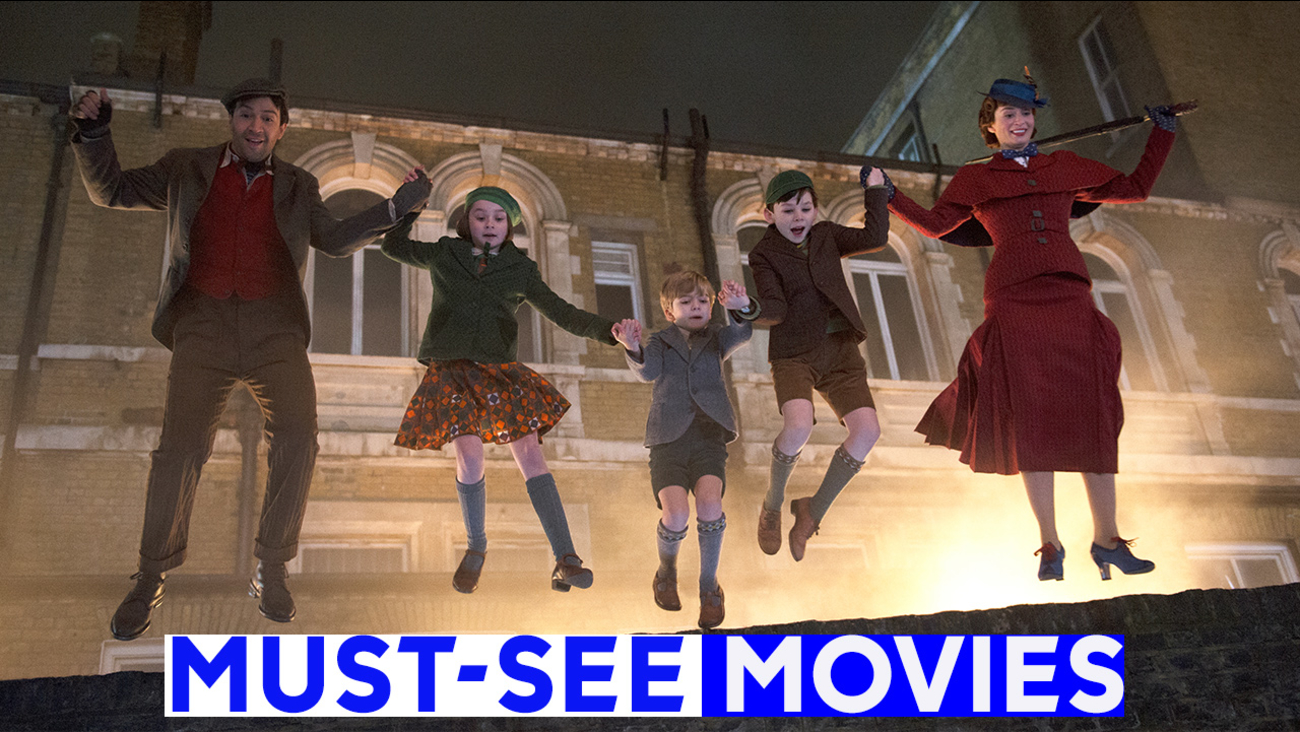 NEW YORK (WABC) -- This holiday season is packed with a variety of movies from the return of the supercalifragilisticexpialidocious Mary Poppins to Christian Bale transformed into Dick Cheney.

Here are the must-see movies, according to Sandy Kenyon:

The secret to making a good movie is starting with a great cast, and the star who plays the title role in "Mary Poppins Returns," Emily Blunt, is ideal.


Spider-Man: Into the Spider-Verse

This movie is a back-to-the-future journey that's a salute to the past while building for the future and bringing much-needed diversity to the franchise.

Sandy Kenyon reports on the new superhero movie "Spider-Man: Into the Spider-Verse."

Netflix may have its first Best Picture nomination at the Oscars. The film has already been called the year's best by critics here in the city, as well as in Chicago and Los Angeles -- it will be on Sandy's "10 best" list as well.

The title alone suggests "Destroyer" is not exactly what you'd call a traditional holiday attraction, but if you've had your fill of all the family films in theaters now, I urge to you to go see one of the world's biggest stars give one of her best performances ever.

Vice and On the Basis of Sex

Two movies about two icons hit theaters this Christmas, and both are worth seeing but for different reasons. The first is "Vice," directed by Adam McKay. His film "The Big Short" earned him an Oscar and a nomination for his star, Christian Bale. They've teamed up again, and the result is one of the best films of the year.

Aquaman and Bumblebee
Two blockbusters in one. One I like. The other I don't.

Welcome to Marwen
Bad buzz and plenty of competition have dimmed the prospects for "Welcome To Marwen," and it doesn't help that the trailer makes the movie look better than it is.

Second Act
I have to resist the temptation to call her "Second Act" a new low for Jennifer Lopez, because her appearance opposite then-boyfriend Ben Affleck in "Gigli" was so bad it'd be pretty much impossible to do worse.

Dr. Seuss' The Grinch
I did not appreciate the mean and cynical Jim Carrey version, which nevertheless was the biggest hit of the year back in 2000. But I'm happy to say "Dr. Seuss' The Grinch" is more in keeping with visual style of the book from the 1950s, updated with 21st century visual effects.

Ralph Breaks the Internet
It's being called a "worthy successor" to a movie that grossed almost half a billion dollars in theaters back in 2012, and it's funny and full of heart -- just like the folks who made it.

Creed II
The eighth movie in the franchise hearkens back to "Rocky IV" when Ivan Drago, a fighter played by Dolph Lundgren, battered Apollo Creed so hard he died. And now, his son is looking to avenge his father's death by fighting Drago's son.

Ben is Back
"Ben Is Back" is being praised for its performances and its timely story about one family's attempt to cope with addiction. The movie was shot in and around Rockland County. Julia Roberts plays a mother; Lucas Hedges, her son.

Vox Lux
Every so often a movie comes along that fools others into thinking it's profound, and as I sit there suffering through it, I take comfort from thinking about the many ways it rings false and how much fun it will be to show you why it's fake. "Vox Lux" is just such a movie.

The Mule
Clint Eastwood is 88 years old, and the star directed himself in his latest film as "The Mule" -- which is the name drug cartels use to describe those who carry their product. The character, Earl Stone. is a guy nearing 90 years of age, who incredibly is based on a real old man who made almost a million dollars transporting drugs for a Mexican cartel in his pickup before he was finally caught and sent to prison.

Widows
A new film from director Steve McQueen, who gave us 12 Years a Slave, features Viola Davis as the leader of a group of Widows. It's a heist gone wrong that leaves several men dead and their wives high and dry.

Other films to consider

Fantastic Beasts: The Crimes of Grindelwald
Mary Queens of Scots