15 Bronx fire victims to be remembered at joint funeral Sunday 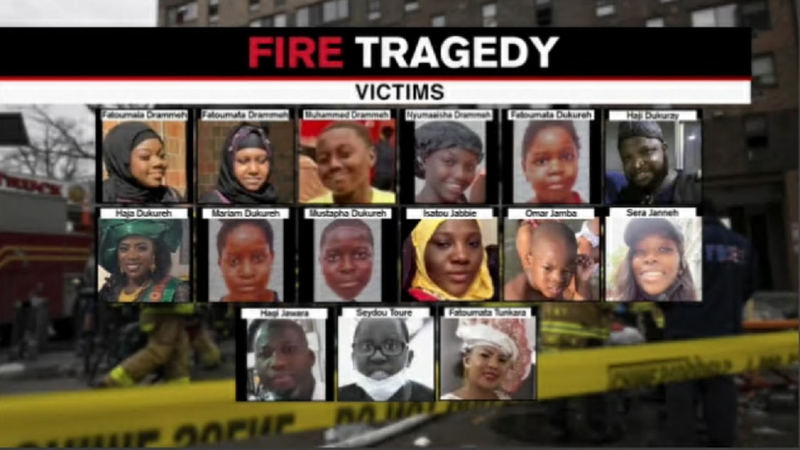 15 Bronx fire victims to be remembered at joint funeral Sunday

TREMONT, Bronx (WABC) -- More tears are sure to be shed on Sunday for the victims of the Bronx fire tragedy.

Fifteen of the victims will be remembered at a joint funeral. It is set to start at 10 a.m., the very same hour when, Last Sunday, smoke from a fire inside an apartment began filling the entire high rise.

Sunday marks a week since the calamity that claimed 17 lives at the 19-story building on East 181st Street in the Tremont section.

Eight of the victims were children.

The fire was ignited by a space heater inside a unit on the third floor. The apartment's front door did not close when the tenants fled. One of those tenants spoke to Eyewitness News.

FDNY Commissioner Nigro says the door was not obstructed.

"The door when it was fully opened stayed fully opened, because it malfunctioned," Nigro added.

Nigro also says another self-closing door on the 15th floor also malfunctioned. The stairwells and halls became a giant chimney.

The youngest of the victims was two years old - the oldest, just 50.

A funeral for all but two of them is set to take place at the Islamic Cultural Center of the Bronx.

Almost as quickly as the disaster unfolded, help began arriving.

In fact, there were so many donations at a nearby youth center, many had to be moved to different locations.

A GoFundMe for the victims raised a half million dollars on the first day - that number has now climbed to more than a million.