The announcement marks a major policy reversal for the nation's largest school system, just 10 days after Mayor Bill de Blasio, a Democrat, announced that schools were shutting down because of a rising number of COVID-19 cases in the city.

Some elementary schools and pre-kindergarten programs will resume classes on December 7, a week from Monday, the mayor said. Others will take longer to reopen their doors.

According to the mayor's breakdown, 3-K, Pre-K and grades K-5 will return to in-person learning on December 7. 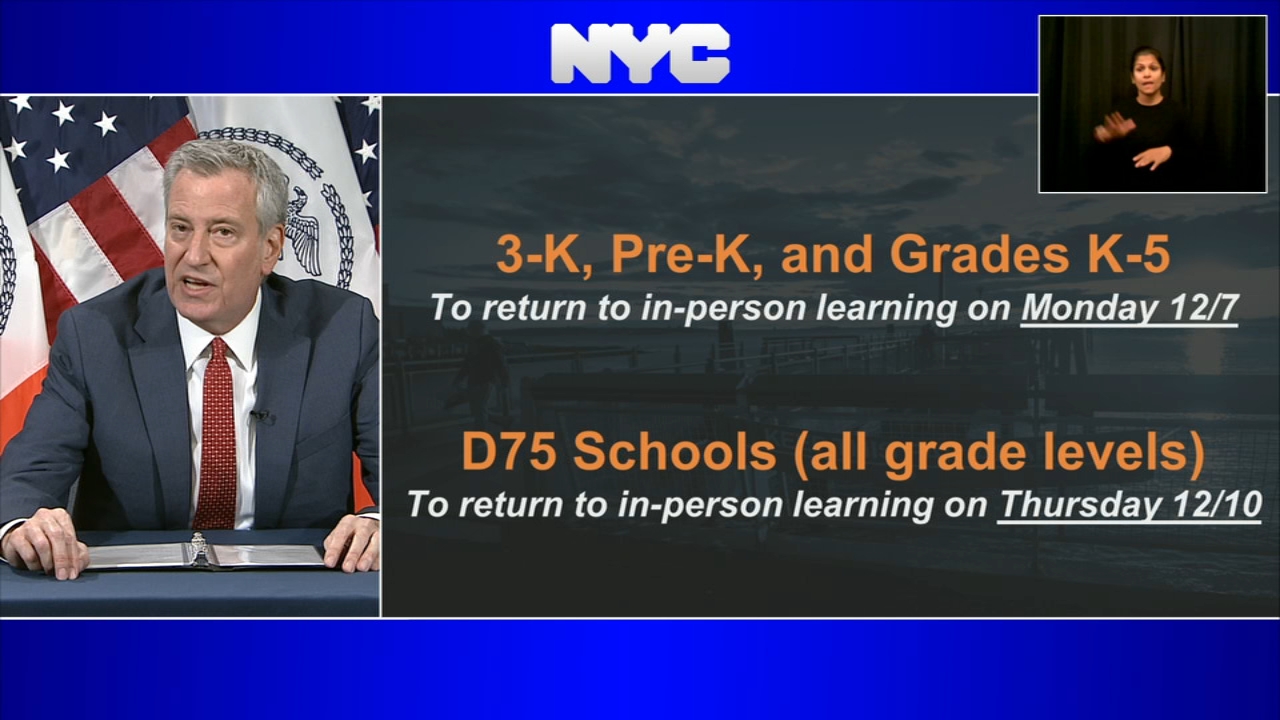 D75 schools that cater to students with disabilities will return to in-person learning on Thursday, December 10.

The plan for reopening middle and high schools is still being developed, de Blasio said. Those students will remain on the remote learning plan for now.

Sunday could be the busiest travel day since the coronavirus pandemic began, causing concern for local leaders and health officials.

Meanwhile, the mayor said schools in Staten Island's orange zone will need to meet the state's criteria to reopen. He says he's hopeful they will also reopen the week of December 7.

The mayor says the immediate focus is on younger grades, because of the large number of tests that will be required under the new weekly plan.

"When you combine all the measures we've had before that gold standard of health and safety measures, plus the situation room, plus the new testing and other standards we're putting in place. We feel confident that we can keep schools safe."

Schools Chancellor Richard Carranza reiterated the safety measures in place and said he also believes they will be able to keep schools safe.

"Our schools have been remarkably safe and it's important that we're taking good care to keep them that way while New Yorkers do everything we can to stop the spread," he said.

About 190,000 students will be eligible to return to classrooms in the first round of reopening, just a fraction of the more than 1 million total pupils in the system.

The great majority of parents have opted to have their kids learn remotely by computer.

Mayor de Blasio said that many of those returning in person will be able to attend five days of class a week, up from one to three days previously, which is now the preferred learning model.

However, at least one New York official asked for more clarity on the adjusted learning model.

"Now that the mayor has indicated a desire to phase out blended learning, the DOE must provide clear direction and adequate resources in schools where it is possible and afford school leaders flexibility and discretion where it is not," Council of School Supervisors and Administrators President Mark Cannizzaro said.

Elementary school students attending in person will be required to undergo frequent testing for the virus.

Previously, the city had set a target of testing 20% of teachers and students in each school building once a month. Now, the testing will be weekly. 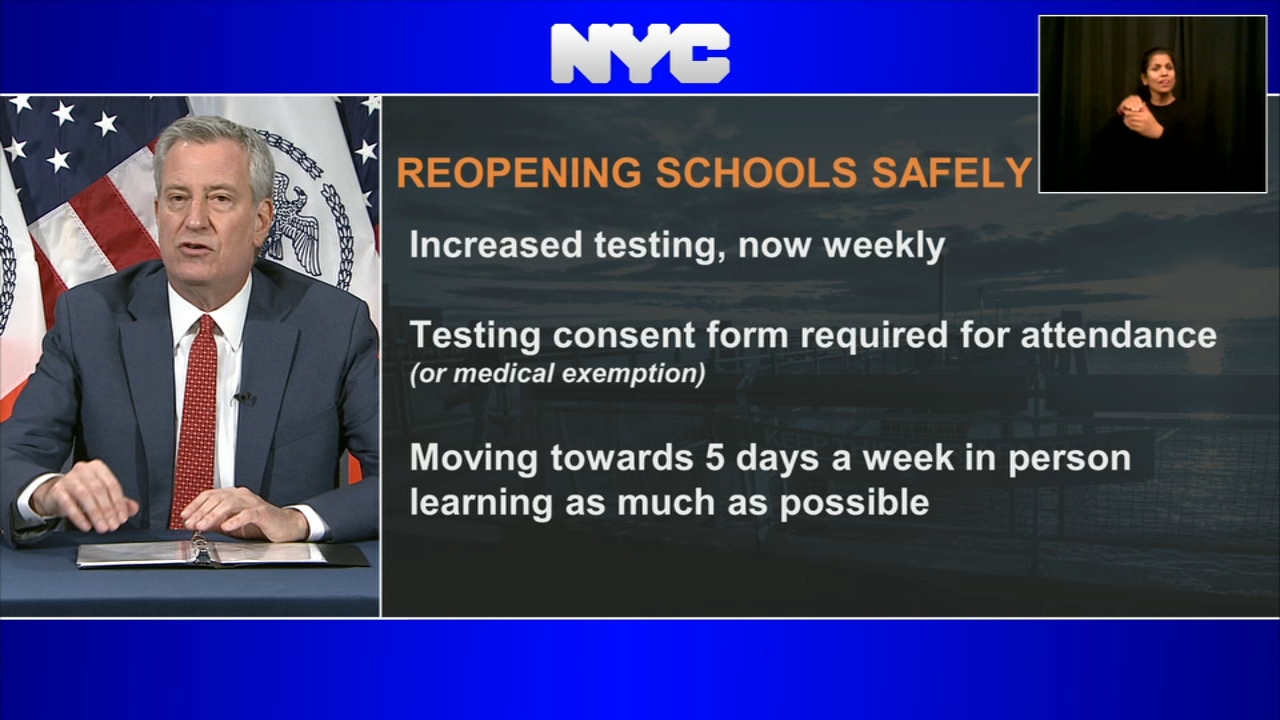 The mayor said the city was doing away with its previous trigger for closing schools, which was when 3% or more of the virus tests conducted in the city over a seven-day period came back positive.

New York City exceeded that threshold early in November, and things have slightly worsened since then.

The United Federation of Teachers (UFT) released a statement supporting the phased reopening of schools:

"While schools in the city's high-impact red and orange coronavirus zones will continue to abide by the state's 3% closing rules, we are supportive of a phased reopening of schools in other neighborhoods as long as stringent testing is in place," UFT President Michael Mulgrew said. "This strategy - properly implemented - will allow us to offer safe in-person instruction to the maximum number of students until we beat the pandemic.

When asked about the decision on Sunday, Governor Andrew Cuomo said it was the "right decision," citing lower transmission in schools, especially in the younger grades.

"If the kids aren't in school, then the kid is at home, which is a place we are seeing spread," Cuomo said. "Or the child is out in the playground, where we are seeing higher infection rate."

"What is most important is the hospitalization rate and the burden on the hospital system. That's the phase we are entering," he said.

In addition, 55 deaths were reported on Saturday.

Meanwhile, in the city, more than 9,300 residents have tested positive for the virus over the past seven days.

According to the mayor, 130 new COVID hospitalizations were reported, including 1,636 new cases.

Do you have coronavirus symptoms?
Where to get tested for COVID-19 coronavirus
New CDC guidelines on masks
How coronavirus changed the New York region 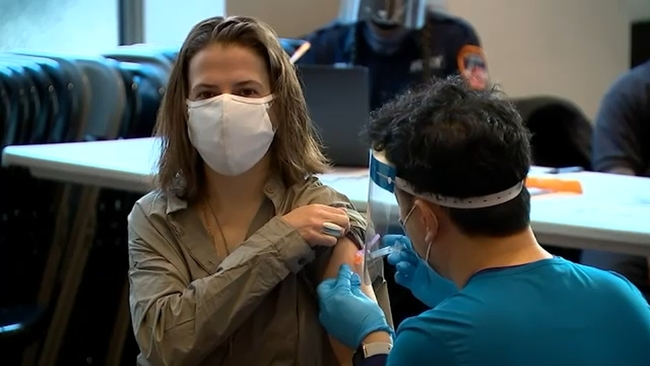