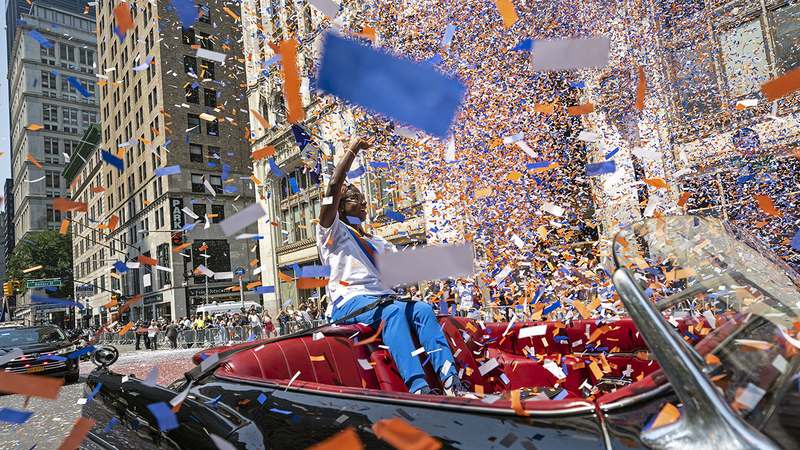 Salute to the Hometown Heroes

NEW YORK CITY (WABC) -- New York City honored all the essential workers who brought the city through the worst of the COVID-19 pandemic with a ticker-tape parade on Wednesday.

The parade featured 14 different floats, making it one of the largest ticker-tape parades in the city's history.
EMBED More News Videos

New York City is honoring all the essential workers who brought the city through the worst of the COVID-19 pandemic with a ticker-tape parade.

The nurses, doctors, first responders, teachers, bus drivers and more rode on floats through a canyon of tall buildings and falling confetti, with Queens nurse Sandra Lindsay -- the first person in the United States to receive the COVID-19 vaccine -- serving as the parade's Grand Marshal.
EMBED More News Videos

"What a difference a year makes," she said. "Fifteen months ago, we were in a much different place. But thanks to the heroic efforts of so many, health care workers, first responders, frontline workers, the people who fed us, the people who put their lives on the line, we can't thank them enough."

The parade stepped off at 11 a.m. at Battery Park and proceeded north up the Canyon of Heroes.

Nina Pineda rode onboard a 118-year-old subway car in the parade with the MTA. Interim Transit President Sarah Feinberg shared an emotional moment with her.
EMBED More News Videos

Stacey Sager spoke to a doctor along the parade route who says that the only way for NYC to go is up!

New York City Police Commissioner Dermot Shea spoke to Mike Marza about the NYPD during the pandemic and what the parade means to him.
EMBED More News Videos

Mike Marza talks to Police Commissioner Dermot Shea about the NYPD during the COVID pandemic at the Hometown Heroes Parade.

"They deserve a march down the Canyon of Heroes, because it's something that is reserved for the greatest folks in history," de Blasio said. "Well, here are some of the folks who made history in New York City's toughest hour."
EMBED More News Videos

Nina Pineda rode along one of the Hometown Heroes parade floats with MTA workers.

Justin Davis, a nurse who came from Pittsburgh to work at a Manhattan hospital during the height of the crisis last year, was excited to be riding in the parade on a float sponsored by AMN Healthcare, the staffing company he works for.

"I think it's just going to be real cool," Davis said. "And hopefully it can just bring closure."

Davis, a 43-year-old military veteran, said he came to New York City when it was a pandemic epicenter, leaving his wife and three young children behind, "because I wanted to do something to make my family proud."

The parade gave Davis' family and a whole bunch of New Yorkers a chance to express their pride and gratitude to him and other essential workers.

"This is a huge thing," said his wife, Jennifer Davis. "This is awesome. We just had to come up here and be here for him, to support him and celebrate him."

The previously planned ceremony in City Hall Park at the parade's conclusion to publicly thank the workers and celebrate the Summer of NYC was canceled due to the extreme heat.

De Blasio said additional precautions were taken to ensure the safety of participants and spectators.

The Hometown Heroes parade was the latest in a 125-year New York City tradition.

The same type of celebration, known as a ticker-tape parade for the thin bands of paper that used to shower marchers, has been held in the past to celebrate returning soldiers, astronauts and championship sports teams.

The last parade along the iconic stretch known as the Canyon of Heroes honored the U.S. women's soccer team for their 2019 World Cup win.

Labor strife also cut into the plans, as some EMS workers boycotted the parade to protest what their union says is low pay. A union representing workers in the health field said it was skipping the parade over the end of essential worker pay and a lack of early retirement incentives for its members, who include social workers and contact tracers.