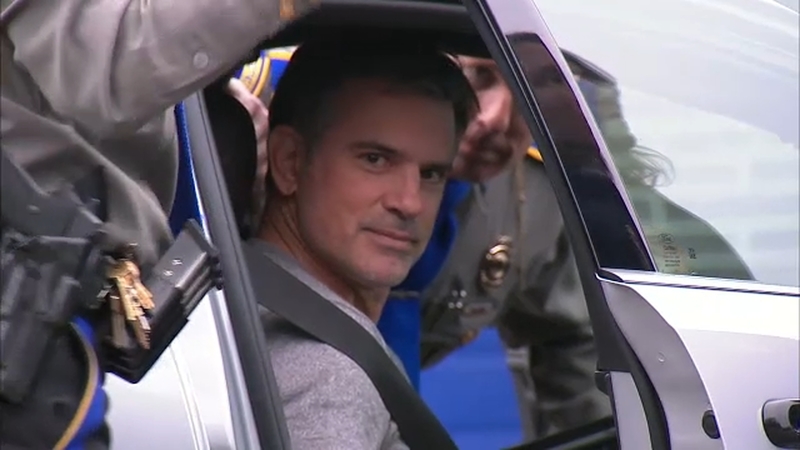 FARMINGTON, Connecticut (WABC) -- The estranged husband of a missing Connecticut mother of five appeared in court Wednesday on murder and kidnapping charges, as details in the arrest warrants shed light on what may have happened in the highly publicized case.

Fotis Dulos was arrested at his home in Farmington Tuesday in connection with the disappearance of Jennifer Dulos, who was last seen on May 24 driving a 2017 black Chevrolet Suburban shortly after dropping her kids off at school in New Canaan.

Police have not commented publicly on the murder charges, but the arrest warrants hint at a financial motive. Fotis Dulos had debt totaling $7 million and would have expected some access to his children's trust funds if Jennifer Dulos disappeared and he got custody of the children, the warrants said.

Fotis Dulos, who has denied any role in her disappearance, wore a blazer, dress shirt and jeans at the arraignment. His lawyer, Norman Pattis, noted Jennifer Dulos' body has not been found.

"What we have is a suspicious disappearance and an entirely circumstantial case," Pattis told reporters after the court hearings. "After this great length of time, I expected to see a forensic display that was breathtaking. I saw nothing."

Also in court were Fotis Dulos' girlfriend Michelle Troconis and attorney Kent Mawhinney, who are both charged with conspiracy to commit murder.

Fotis Dulos' bond was set at $6 million, and if he posts, he will be placed under house arrest with GPS monitoring. The judge issued an order of protection for his children and their maternal grandmother, who currently has custody.

Troconis' bond was lowered from $2 million to $1.5 million, and she was already under GPS monitoring. Mawhinney's bond stays at $2 million.

Connecticut State Police appeared to suggest Mawhinney may have dug the hole to bury Jennifer Dulos' body, which has never been found, though the arrest warrant makes no mention of any evidence that Mawhinney actually buried a body.

It does, however, detail the discovery by two men not otherwise connected to the case of a hole at a Connecticut gun club Mawhinney once belonged to that contained bags of lime. The warrant identified those men only as "Lawlor" and "McKay."

"Lawlor describes the hole as "100% human grave," the warrant said. "Inside the hole, Lawlor found a blue tarp and two unopened bags of lime. McKay has remarked, 'What's the lime for?' Lawlor had answered 'for trying to get rid of a body.'"

The arrest warrant for Troconis states bluntly that there are "indications that Jennifer Dulos is not alive."

State Police said there has been no activity on any of her financial accounts since the day before she went missing, no activity on her cell phone, and no one has seen or heard from her.

Fotis Dulos' arrest warrant references zip ties, and authorities say four were recovered -- two of which were reportedly stained with a blood-like substance.

"It appears the zip ties were used to secure and incapacitate Jennifer Dulos for some time," investigators wrote.

The Chief Medical Examiner in Connecticut concluded that "Jennifer Dulos had sustained an injury, or multiple injuries, which he would consider 'non-survivable' without medical intervention."

"Above all, we thank the Connecticut State Police and the New Canaan Police Department, as well as the assisting local departments, for their tireless commitment and diligent, painstaking work that have led to these arrests," said spokesperson Carrie Luft on behalf of the family and friends of Jennifer Dulos. "Although we are relieved that the wait for these charges is over, for us there is no sense of closure. Nothing can bring Jennifer back. We miss her every day and will forever mourn her loss. We believe the arrest warrants will speak for themselves, and we ask that you please respect our privacy during this time. Thank you."

Authorities say Mawhinney represented Fotis Dulos in a civil matter, and his name appeared on "alibi scripts" Dulos and Troconis had written.

Troconis told police Dulos was meeting with Mawhinney at the time Jennifer Dulos disappeared, and according to the arrest warrant, Mawhinney gave conflicting statements to police about his contact with Dulos.

"Mawhinney was asked if he would know why Dulos would have contacted him while dropping evidence into trash receptacles in Hartford, CT," the warrant reads. "Mawhinney reiterated that he did not remember any kind of contact with Dulos and did not know why Fotis would call him while he was disposing of evidence."

Mawhinney was previously arrested on January 21, 2019, accused of sexual assault, disorderly conduct and unlawful restraint involving his estranged wife. He was arrested again on July 5, 2019, for allegedly violating the terms of the protective order by using a third party, Fotis Dulos, according to police, to contact his estranged wife.

Fotis Dulos and Troconis, had also previously been arrested on charges of tampering with and fabricating evidence.

Both had pleaded not guilty to those charges.

The children are currently being cared for by Jennifer Dulos' mother, who is seeking custody and had been in her own battle with Fotis Dulos.

In addition to the ongoing custody battle, Fotis Dulos is caught in a bitter legal battle with his in-laws over nearly $3 million in unpaid loans that he contends were gifts.