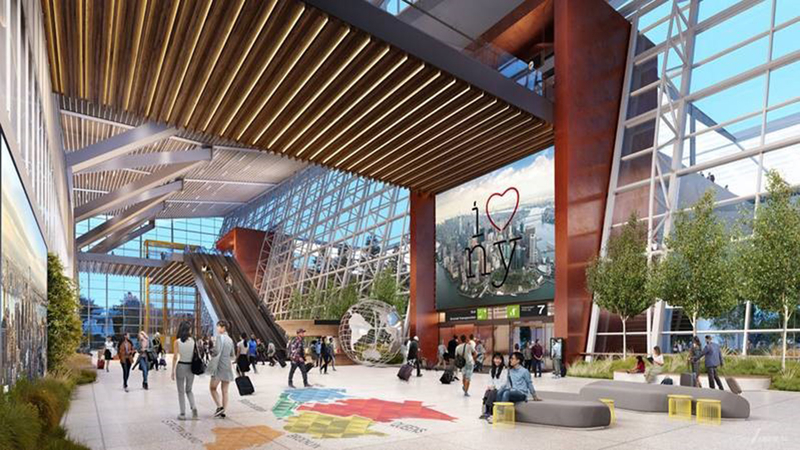 NEW YORK CITY (WABC) -- John F. Kennedy International Airport is about to get some much-needed renovations thanks to a privately funded investment.

Governor Kathy Hochul announced Monday that private partners will be investing $9.5 billion to overhaul Terminal 1, Terminal 2 and the old Terminal 3 at the airport.

Hochul said the Port Authority of New York and New Jersey reached an agreement with The New Terminal One group, who will be financial supporters of the project.

"As we recover from this pandemic, I want to ensure that everyone traveling to New York has a welcoming and streamlined experience, and that New Yorkers have the modernized transportation hubs they deserve," Hochul said. "The time to get large infrastructure projects done is now, and I'm committed to getting JFK's brand new Terminal One underway and completed as soon as possible."

Construction was initially scheduled to start in 2020, but was delayed due to the pandemic.

The new terminal will be completed in phases and create more than 10,000 jobs.

"Moving forward with this state-of-the-art international gateway, and the extraordinary level of private investment it brings, will create thousands of good-paying construction jobs critical to our recovery from the pandemic, while building the foundation of economic growth for decades to come," Port Authority Chairman Kevin O'Toole said.

This is the fourth major terminal project that's part of a larger project to completely transform JFK into a "world-class" airport.

The terminal will be transformed into a 2.4 million square foot facility with 23 international gates, making it the largest international terminal at JFK.

The updated terminal will be able to handle 23 million travelers a year.

There will also be state-of-the-art technology to help with flight check-in, managing long lines and TSA security checkpoints.

An emphasis on sustainability is also part of the construction plan. Improvements like solar hot water, and the conversion of diesel equipment, like baggage tractors, to electric are just some of the efforts being taken to create a greener terminal.

Construction on the project is set to begin next year and is scheduled to be completed by 2030.

Here's what you need to know about the tornadoes that tore through Kentucky and other Midwestern states.