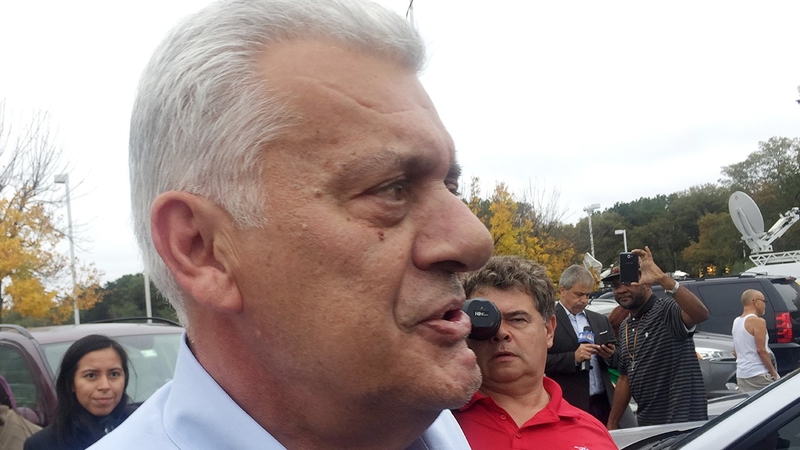 Venditto, 68, of Massapequa; Porcelli, 70, of Ronkonkoma; and Nocerino, 65, of Massapequa, all appeared Thursday before Supreme Court Justice Charles Wood.

They pleaded not guilty and are due back in court on Sept. 26. They were released.

According to a statement from Singas, Venditto directed Nocerino to hire "Individual B" to work in the town parks department at the behest of Frederick Ippolito, Oyster Bay's former planning and development commissioner. At the time, the town was not hiring new employees and was discussing laying off existing employees because of financial problems.

Singas said that the individual was to be paid more than twice the appropriate salary for the position. Months later, Ippolito directed that the individual be fired. Venditto and Porcelli fired the employee, but also fired other employees to divert attention, said Singas.

The owners of a Long Island paving company also were indicted, accused of bribing a former Oyster Bay commissioner more than $1.6 million to help facilitate the construction of the Cantiague Commons senior housing development.

Elia "Aly" Lizza, 69, and his wife, Marisa Lizza, 61, of Oyster Bay Cove, are charged with several counts of bribery, among other charges. Venditto, and Frank Antetomaso, 77, of Massapequa, also are charged in connection with the case.

Singas said Marisa Lizza and Elia Lizza, president of Carlo Lizza & Sons Paving Inc., wrote about $1.6 million worth of checks from 2009 to 2016 from personal accounts to Ippolito.

The Lizzas paid Ippolito to negotiate payments in excess of $20 million dollars to Elia Lizza from the developer of Cantiague Commons, according to the indictment. Ippolito also controlled the oversight of the developer's rezoning application and site plan approval.

Antetomaso, a former town Commissioner of Public Works and principal at the engineering firm behind Cantiague, passed messages between Ippolito and Elia Lizza, the indictment said. Ippolito and Venditto are accused of advocating to the town on behalf of Elia Lizza in connection with the application.

They pleaded not guilty at an arraignment Thursday before Wood and were released. All are back in court Sept. 26.

In a third part of the corruption case, Antetomaso, and his nephew Salvatore Cecere, 50, of West Sayville, were arraigned before Wood and charged with one count each of official misconduct and theft of services.

Both pleaded not guilty and are due back in court on Sept. 26. They were released on their own recognizance.