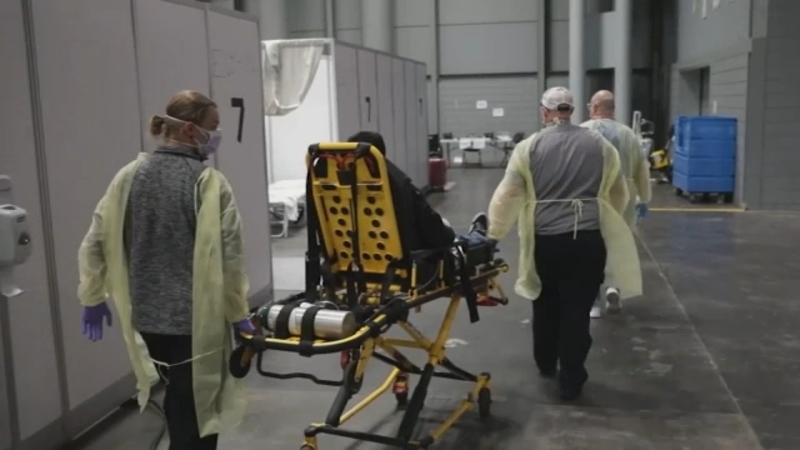 Operated by the NYC Health + Hospitals Test & Trace Corps, the site at Citi Field is currently slated to launch the week of Jan. 25.

The Citi Field site will eventually scale up to be able to vaccinate approximately 5,000-7,000 eligible New Yorkers per day, building on the city' s goal to offer one million doses of the vaccine by the end of January.

"What's clear is now that we're in folks over 75, there's clearly a lot of demand," de Blasio said. "It's over half a million New Yorkers over 75, and they want this vaccine."

A Yankees spokesperson confirmed to Eyewitness News that Yankee Stadium is also being considered as a site:

Residents in Group 1b are now eligible to get the vaccine, including frontline essential workers like teachers, transit workers, police and firefighters, and all people over the age of 75.

The mayor also announced that the next phase of those eligible to receive the vaccine, group 1b, will now include people who live and work in shelters and public-facing grocery store workers. He is also asking for more essential workers to be covered, including food delivery workers and deli and bodega workers.

All-night vaccinations are now underway at two other 24/7 vaccine mega-sites, located at the Brooklyn Army Terminal in Sunset Park and the Bathgate Contract Postal Station in the Bronx.

Both were completely booked overnight, an indication of how high the demand is for the shots.

Check if you are eligible to receive the COVID-19 vaccine

After a rocky start, de Blasio says the city managed to vaccinate 100,000 people last week with the goal is to inject shots into the arms of a million New Yorkers by the end of this month.
EMBED More News Videos

If you're eligible, you can make appointments at nyc.gov/vaccinefinder or by calling 877-VAX-4NYC.

Officials say about 30-40% of people in the first group that was eligible to receive the vaccine actually turned it down. Now, there's a push to use up the excess supply fast.

Another city site opened at 125 Worth Street in Lower Manhattan on Tuesday.

The city will open Gotham Health on Staten Island at 165 Vanderbilt Avenue on Wednesday, and a larger Staten Island site, at the Empire Outlets, opens next week.

Another mass vaccination site opens Saturday in the Corona section of Queens. By the end of this week, the city will have 160 vaccination sites open in total, in all of the five boroughs.

The state is also opening its own mass vaccination sites, starting with the Javits Center on Wednesday.

Due to limited vaccine supplies, Cuomo said it could be April before everyone who wants a vaccine in these groups can get one.

"We are going to accept the federal guidance of the 65 or more and the immunocompromised," he said on Tuesday. "I don't want New Yorkers to think we are not doing everything we can to make them eligible for the vaccine because I want to keep people in New York as calm as we can keep people in these anxious times. I don't want people to think that if people in any other state are eligible when they are not, but the dose of reality is great, now we have 7 million people eligible and we have the drip drip drip of the faucet of federal dosage availability at 300,000."

He released information on where mega-vaccination sites would be located. All locations require appointments.

The California woman who was arrested after being seen on video tackling a Black teenager whom she falsely accused of stealing her phone at a Manhattan hotel has been arraigned.


How to get vaccinated in the Tri-State area
Find out how many people may get a COVID-19 vaccine before you
Do you have coronavirus symptoms?
Where to get tested for COVID-19 coronavirus
WATCH: Eyewitness to a Pandemic
Centers for Disease Control and Prevention on coronavirus