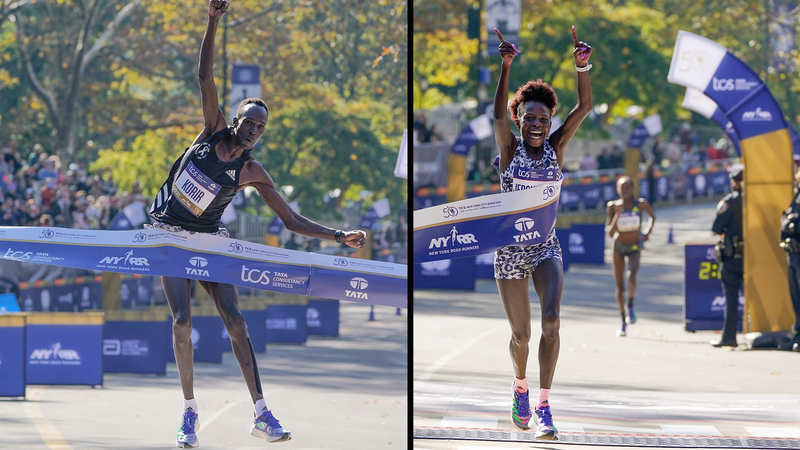 And for a city whose sports fans don't accept second best, Peres Jepchirchir came through with a memorable first.

Korir and Jepchirchir made it a Kenyan sweep at Sunday's New York City Marathon, with Korir winning the men's race two years after finishing second and Jepchirchir becoming the only woman to take a marathon major in the fall after earning an Olympic gold medal.

The second oldest of the world's marathon majors returned after canceling in 2020 due to the coronavirus pandemic. In a city where over 34,000 have died of COVID-19, organizers hoped for an uplifting celebration akin to the marathon staged two months after the 9/11 attacks.

"It was fantastic," Korir said.

On streets emptied 21 months ago except for ambulances rushing to aid a city paralyzed by the coronavirus - and later filled with anguish and frustration in the days after George Floyd's murder - there was simply joy Sunday as around 30,000 runners made their way through the city's five boroughs.

Get on up, Albert Korir!

He is your 2021 #TCSNYCMarathon Professional Men’s Open Division champion! pic.twitter.com/l0fKZ72BX4

It was Korir's first victory in one of the World Marathon Majors and his first time atop any podium since winning the Ottawa Race Weekend Marathon in 2019.

The 27-year-old Korir finished second to Geoffrey Kamworor in 2019 by 23 seconds.

Korir and fellow Kenyan Kibwott Kandie were side by side as they passed El Aaraby and Faniel, but Kandie - the world record holder in the half marathon - fell off in his marathon debut.

El Aaraby held on for an improbable second-place finish after coming in 11th at the Tokyo Olympics. Faniel was third.

The marathon was broadcast on Channel 7 in New York City.

WOMEN'S WINNER
Peres Jepchirchir of Kenya pulled from the pack at the entrance to Central Park and won the New York City Marathon, becoming the first woman to win a marathon major in the fall after winning an Olympic gold medal.

Jepchirchir was side by side with countrywoman Viola Cheptoo and Ethiopia's Ababel Yeshaneh from the time they entered the Bronx until they got to Central Park's entrance.

Moments after guzzling two energy gel packets, Jepchirchir turned on the jets and pulled away, winning in 2:22:39 for the third-fastest time by a woman in NYC Marathon history.

"It's not easy," she said of the New York course. "Toward the finishing line, I felt something I've never felt before to finish a marathon."

Jepchirchir, 28, took gold at the Tokyo Olympics marathon in August and came back on a short recovery to win a race once dominated by her hero Mary Keitany, a four-time winner in New York who recently retired from the sport.

Cheptoo finished second in her marathon debut and quickly found her brother, Bernard Lagat, who was broadcasting the race on ESPN. Yeshaneh was third.

WHEELCHAIR COMPETITION
Marcel Hug won the men's wheelchair division at TCS NYC Marathon by a wide margin. Not a competitor was in sight as he crossed the finish line.

The 35-year-old added yet another prize to a remarkable year that included four gold medals at the Tokyo Paralympics, including in the marathon. He also won the Boston Marathon last month.

Hug, born with spina bifida, finished second to American Daniel Romanchuk in 2018 and '19. The latter defeat came by just one second.

Hug finished Sunday in 1 hour, 31 minutes and 24 seconds, more than 6 1/2 minutes ahead of Britain's David Weir in second and Romanchuck in third.

The 27-year-old took gold over Schr at this year's Tokyo Paralympic Marathon by just one second, but she blew away the field Sunday, winning by nearly three minutes at 1 hour, 51 minutes and 1 second. McFadden was second and Schr was third.
EMBED More News Videos

The field was shrunk by about 40% this year to help keep runners distanced, and participants had to provide proof of vaccination or a negative COVID-19 test within 48 hours of race day. Runners registered for the 2020 race that was wiped out were given the option of a full refund or entry into the 2021, '22 or '23 races.

Tony Award-winning actress Kelli O'Hara was slated to perform the national anthem before testing her lungs on the course, while two members of British rock band Mumford & Sons also were signed up to run. The entrants also included "The Bachelor" and "The Bachelorette" contestants Matt James, Tyler Cameron, Tayshia Adams and Zac Clark.