And he will meet today with religious leaders to discuss large-scale events that are drawing a lot of scrutiny.

Nearly 100 schools are impacted by the shutdown as officials work to get control of the outbreaks.

The mayor said on Tuesday that the closures would last at least two weeks, and possibly up to a month.

PS 164 in Borough Park is among the schools closing its physical campus Tuesday and going fully remote.

It is among the schools in nine zip codes in the city doing the same.

The city's daily positivity rate was 1.9% and a 7-day average positivity of 1.65%, still below the city's threshold of 5%. But the nine affected ZIP codes have positivity above 3%.

All of them are in Brooklyn and Queens; several are in predominantly Orthodox Jewish communities in Brooklyn.

The city conducted 1,300 tests in 35 schools in the affected ZIP codes and just two of those tests came back positive.

"Even though the schools are doing quite well, we just want to reduce the amount of overall activity for a few weeks and really stop the spread quickly," he said.

In Borough Park the positivity rate was 8 and a half percent on Sunday, and it's been well above three percent for more than a week now.

To put that in perspective, the citywide rate of people testing positive is just 1.83 percent.

"I obviously deeply, deeply wanted to see our schools open and stay open, but for these particular zip codes, the right thing to do is to take them down for a period of time," the mayor said. "Hopefully in a matter of weeks they'll be right back up."

Governor Cuomo says large religious gatherings like one caught on camera in Borough Park are also a major problem.

On Monday night, the FDNY sawed their way into a warehouse, where sources say they found 500 people gathered inside, few with masks on.

But the organizer said the space can hold 2,000 people, so they were in compliance with regulations. The NYPD issued no summonses.

"There never should have been a gathering like that and the folks who did it did something harmful and that has to be addressed," Mayor de Blasio said.

Today the governor will meet with Orthodox Jewish leaders, but also made clear that the rules apply to people of all faiths.

He also said indiscriminately closing businesses based on zip codes is not a good idea, and that the state will come up with its own plan.

"A zip code is not the best basis to make these decisions," Cuomo said. "A zip code is designed for postal service. It has no relevance to stopping a health pandemic. We have better data. We have data that goes down to the address level. You can find out exactly where people live who tested positive and draw the geographic template around that area."

Cuomo added he talked to one of the global health experts.

"He said map where the positive cases are by address and then do a buffer around it, because maybe it spread a little bit," Cuomo said.

But once the state finds "a more intelligent geographic template," it will "close the non-essential businesses in that template."

"I don't want to use an unsophisticated template, and I don't want to change," Cuomo said. "Put out one plan, you are closed on Monday, Tuesday you are open. There's been enough confusion in NYC. They had plan 1: the schools open, no it's not open. Plan 2: the schools will open, then no. I don't do that."

Cuomo said that New York state's hot spot ZIP codes' infection rate is where many states in the country are right now.

Governor Cuomo said that maintaining a 1% positivity rate is "practically unsustainable" as we roll into fall.

"We're coming into the fall and we've been told since early march beware of the fall," Cuomo said. "Schools opening are almost a predictor of an increased infection rate."

Regarding schools in Catholic Academies and Parish Schools in Brooklyn and Queens are imploring Governor Andrew Cuomo to immediately reverse his decision and allow four schools that have been operating safely for weeks, within the COVID hot spot zip-codes, to continue in-person learning.

In the three Catholic Academies and one Parish School located in the affected areas, enrollment totals 1,070 students, and there has only been one confirmed COVID case.

"These statistics prove that the Diocesan COVID-19 safety policies are effectively protecting our students and teachers," Catholic school officials said. "This decision by the Governor clearly fails to take into account the positive progress our Diocesan school system has made so far this school year. It is unconscionable to think that after the many sacrifices our staff, students, and parents have made, and in spite of our almost non-existent infection rate, the Governor has decided to force our four schools to close. The Governor should delay the order related to our schools and visit each one before holding firm to his decision."

Cuomo added that colleges have been found to be more problematic than expected but, "SUNY doing a great job."

"New York is the outlier in all of these national and international trajectories," Cuomo said. "We are the exception to the rule."

But in order to keep up the state's progress, the governor said, "We must attack the clusters."

He said that too many local governments aren't enforcing the mask and social distancing laws. Governor Cuomo again reiterated that warnings aren't working and enforcement is necessary.

The governor said he spoke to Mayor Bill de Blasio, UFT President and Comptroller Scott Stringer about the clusters in New York City.

The governor said that he needs data on the schools in the hot spot ZIP codes in New York City, so he plans to close those schools Tuesday.

Cuomo said non-essential businesses and public spaces in the hot spots should also close, but the state needs a better refined geographic template to do so. The governor said the state is working on redrawing geographic boundaries for the hotspots because using ZIP codes as a guide is imperfect.

"For example, we're closing schools in ZIP codes, but the school district is different than the ZIP code," Cuomo said. "Just because the school is located in that ZIP code, doesn't mean the students come from that ZIP Code."

The city plans to leave religious institutions open, but the governor said that he's talking with the Orthodox community and basically giving them an ultimatum that they need to agree to enforce the mask and social distancing regulations or face closure.

Firefighters were called to a large warehouse in Borough Park Monday night, where sources say they found 500 people gathered inside with very few wearing masks.

Firefighters used heavy duty saws to remove the locks and later replaced them, after issuing a series of fire code violations.

Community activist Heshy Tischler acknowledged the violations but insisted the participants wore masks and that the gathering was in full compliance with COVID-19 regulations.

"The governor has told people that there cannot be gatherings this large," Orthodox community activist Heshy Tischler said. "The Governor says 25% of capacity and we were below 25%. This place can hold 2,000 people."

The NYPD did not issue any COVID-19 summonses. But it took place in one of the city's hottest hotspots. The kind of large gathering the governor has sought to discourage, if not prevent.

Governor Cuomo said he plans to have the same conversations with communities in Nassau, Orange, Rockland counties.

The governor added that the possible closures of public spaces and non-essential businesses would not be determined based on ZIP codes because the data needs to be refined by geographical templates.

The neighborhoods of concern include:

The restrictions will be in place for either 14 days or 28 days, depending on how long the ZIP codes remain under 3% positivity.

This plan averts a looming court fight with the United Federation of Teachers, which has been calling for a plan to close the more than 80 public schools in these neighborhoods.

The teachers' union released a statement Sunday afternoon in support of the plan:

"This is the right decision, one that helps protect our schools, our neighborhoods, and ultimately our city," said Michael Mulgrew, president of the United Federation of Teachers.

An additional 12 ZIP codes are also being closely monitored and are areas of concern.

High-risk activities like gyms and outdoor pools will be closed in these 123areas of concern, but schools will remain open. The mayor said it is possible that some of those 13 neighborhoods could eventually be included to the list of closures, depending on the communities' responses.

The 13 ZIP codes include:

Local governments will provide personnel but the state will overtake the enforcement in the hot spot ZIP codes. 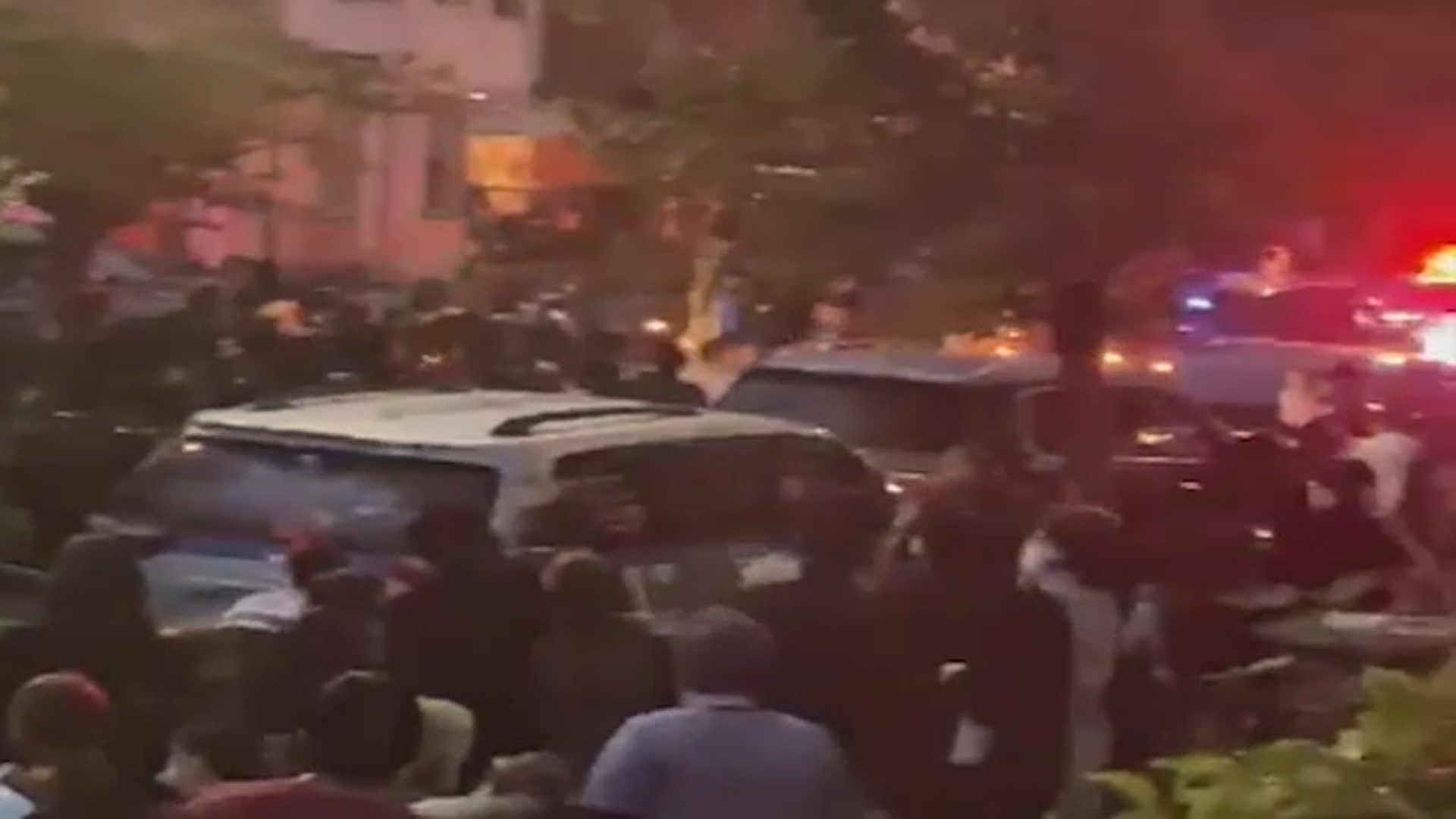