Coronavirus News: New action taken to get homeless off the subways, exclusive video 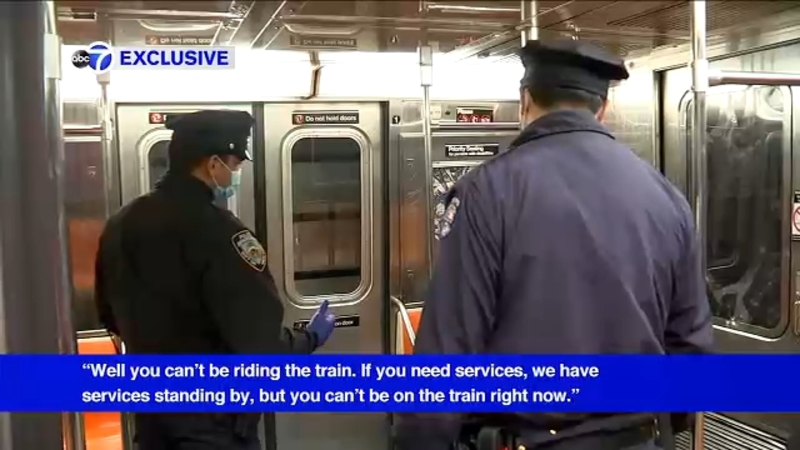 Exclusive: New action taken to get homeless off the subways

NEW YORK CITY (WABC) -- Eyewitness News got an exclusive look at a new plan being put into action early Wednesday morning to try to get homeless people out of subway stations and off trains.

The issue of homeless people sleeping on subway trains has been at a dispute between New York City and the MTA.

Cuomo called on the state agency to tell him what action is needed.

The MTA had rejected Mayor Bill de Blasio's proposal to close stations at the end of line overnight like the one at 96th and 2nd Avenue.

A new plan, already launched, has NYPD and social workers going into stations late night this week, removing homeless people from the trains and offering them shelter. MTA workers then clean and disinfect the cars.

The MTA put out a harsh statement Tuesday calling on de Blasio to "get out of your car and into the subway so you can see what's really going on and solve the problem of your own making."

Transit workers have complained for years about dangerous conditions at so-called terminal stations where cleaning crews contend with sometimes violent people who refuse to leave the train.

It's a problem the union says has been noticeably worse in the past two months when essential service as meant fewer trains -- especially at night.

"The reality is this is a city responsibility. In some ways, I think it's out of sight out of mind. If you're not on one of these trains at midnight or 4:00 in the morning or 6:00 in the morning, you may have some level of ability to ignore it," she said.

Still, the mayor sounds supportive of the new plan.

"We want to create a change where everyone gets out of the station. Our homeless outreach workers are there to engage and get people support," de Blasio said.