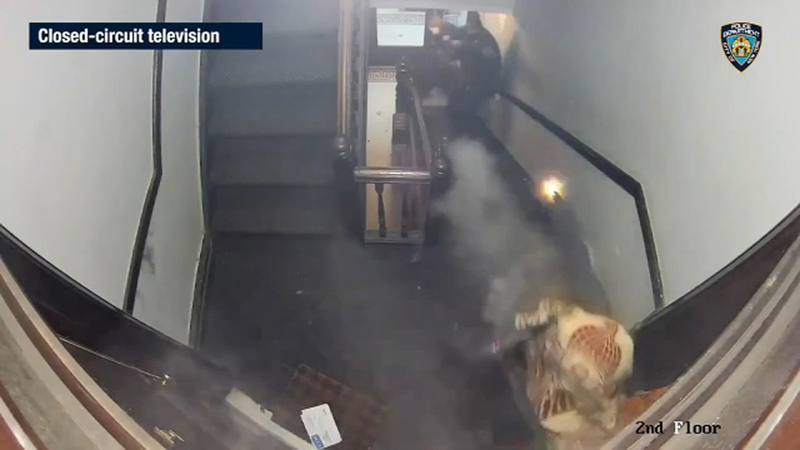 The incident happened Sunday night in a stairwell of an apartment in Prospect Lefferts Gardens where a gunman first opened fired on his roommate and then on officers.


One officer was grazed in the leg and a second was struck in his bulletproof vest. They were both taken to Kings County Hospital for treatment of minor injuries.

The suspect who shot at officers was 44-year-old Ridhwaan Abdur Rashid. He was charged with attempted murder of a police officer, attempted murder and criminal possession of a weapon and unlawful imprisonment.

The officers, assigned to the 71st Precinct, responded to a 911 call of a man shot by his roommate at around 9:15 p.m.

The man made the 911 call from the closet of his second floor apartment on Hawthorne Street, where he was hiding from the armed suspect.

When police arrived, 44-year-old Ridhwaan Abdur Rashid exited the apartment with a blanket over his shoulders.

The officers, who were all in a single-file line outside of the apartment in the stairwell, then engaged with him in conversation regarding the 911 call when authorities say the suspect pulled out a 38 caliber revolver from under the blanket and displayed it toward the officers.
EMBED More News Videos

Police say the officers then drew their weapons and stated multiple times for Abdur Rashid to drop his weapon, but he ignored the commands and opened fire on the officers.

The officers returned fire and the suspect retreated to the apartment.

Neighbors said the sound of gunfire was terrifying.


"Like, 'Boom, boom, boom, boom, boom!'" said Kristen Dauro. "And it's almost like, 'Was that gunshots?" And I don't really hear a lot of gunshots, fortunately, in my life, but this was a distinct noise."

"All we think is, 'Okay, what's going on outside? There's a lot of people. There's a lot of bodies, let's just try to keep as safe as possible and stay inside,'" she said.
EMBED More News Videos

Breaking: A police officer was shot in the chest in Brooklyn on Sunday night, but his bulletproof vest saved him.

After a brief standoff, police were able to get the suspect out of the apartment and take him into custody.
Abdur Rashid, who appeared to be emotionally disturbed and was talking to himself, was taken to a local hospital to be checked out. Charges against him are pending.

"You never know who's next to you," said neighbor Alexander Henry. "You just hope that you just say, 'Hi!' and 'Bye!' and hopefully you have a good day."

The gunman's 45-year-old victim was shot in both legs. He was taken to Kings County Hospital, where he is in stable condition.

A 45-year-old woman, believed to be the injured man's girlfriend, who was also in the apartment was not injured.

Two weapons were recovered at the scene.

It was the fourth incident involving an NYPD officer shot in five months. All officers have sustained minor injuries.

"What last night reminds is two things: one, there is no routine call," NYPD Police Commissioner Dermot Shea said. "And number two, police officers have split-second decisions to make life and death circumstances. We have seen this far too often lately."
NYPD Chief of Detectives

In November, two officers were shot escorting a domestic violence victim to her Queens home. The officers returned fire, killing the gunman.