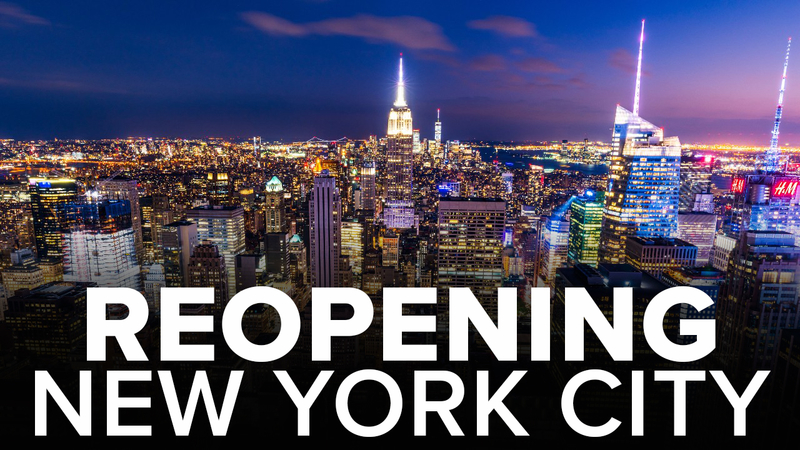 That includes everything at 100% from restaurants, stores, hair salons, gyms, arenas and theaters. The only exception is shows on Broadway.

After nearly 14 months, the city is reawakening and more and more fully vaccinated New Yorkers are removing their masks outdoors and returning to restaurants.

"This is going to be the summer of New York City," de Blasio said Thursday morning. "What you have done is the reason I can make this announcement today."

De Blasio said the breakneck pace of vaccination is driving down the infection rate.

"I think people are going to flock to New York City because they want to live again," he said.

Of course, this is actually all up to the state, the mayor acknowledged during the interview.

"What I'm saying as leader of New York City, we are ready to come back and come back strong," de Blasio said. "The data and the science are saying out loud, it's time to come back."

Back in 2020, the city shut down in an instant. However, many argue bringing the city back will not happen as quickly or easily.

"You don't snap your fingers and everything comes back," said Kathryn Wylde with Partnership for NYC. "It's going to be a process. We don't know how long that's going to take. It's probably going to take a couple of years, and it's not going to come back exactly the same way it was."

Full 24/7 subway service could be restored in the coming weeks.

One thing that won't be fully back in July, is Broadway. Mayor de Blasio said that although theaters aren't part of the declaration, he is still expecting "Broadway full strength in September, but I'd love to see some of the smaller shows up in July and August."

So what can you expect to see back? "In terms of restaurants, in terms of retail, there's no question in my mind July 1 will work for so many of them."

The reopening means that the following will be reopened fully:
- Restaurants and bars
- Stores, shops, and small businesses
- Hair salons and barber shops
- Gyms and fitness classes
- Arenas and stadiums
- Theaters, music halls, and museums

At his own briefing later Thursday morning, Gov. Andrew Cuomo said he hopes they can fully reopen New York City before July 1.

"I would like to get the hopeful reopening date before that, I don't want to wait that long. I think if we do what we have to do we can be reopened earlier," Cuomo said.

During his morning press conference, the mayor also announced that restauranteur Danny Meyer will serve as the new chair for New York City Economic Development Board.

"New York City thrives when people are together," Meyer said. "Now, we're going to bring that back. It's going to be a big challenge because we're going to need to hire a lot of people very quickly."

He's hoping the city will help connect job seekers with those who want to hire.

"I truly believe that hospitality, the way we make people feel in this city, is going to lead the way," Meyer said.

Meantime, walk-in vaccinations are now open to all residents 16 years of age and older at state-run mass vaccination sites in New York.

That means starting Thursday morning no appointment is necessary if you visit a state-run vaccine site like the Javits Center in Manhattan and Yankee Stadium in the Bronx.

There's one caveat, though. You don't need an appointment at the state-run sites if you're getting your first shot.

But you do need an appointment for your second dose.

This all comes as restrictions at bars and restaurants are set to be lifted throughout the month of May in the state.