Staten Island bar reopens for second night in a row, again defying COVID restrictions days after it was shut down MIDLAND BEACH, Staten Island (WABC) -- A Staten Island bar that was shut down by authorities this week after the owners declared it an "autonomous zone" and remained open despite restrictions in place due to the coronavirus pandemic has reopened, again defying state law.

Gelormino says the bar was open Saturday night, and that the tables were six feet apart, including on the patio in the back. He also said all social distancing rules were being followed.

The sheriff's office has not come in the bar yet, but he says he expects them to come back within the next few days.

On Friday, Gelormino said there were about 100 customers inside.
WATCH | Newscopter 7 was overhead as hundreds gathered outside the bar later Wednesday night:
EMBED More News Videos

The owners' purpose for re-opening was to honor their "brothers and sisters in the restaurant business" and that the move is about taking a stand and seeing it through, Gelormino said.

Gelormino claims hundreds of other small business owners have reached out to him, wanting to do something similar.

He said the owners have not paid the summonses they were issued on Tuesday.

Many elected officials including Congresswoman-elect Nicole Malliotakis, have reached out to express their support, Gelormino said.

The tavern is in an area designated by Gov. Andrew Cuomo as an orange zone because of spiking COVID-19 rates and was not supposed to be serving customers indoors. But the owners had declared the bar an "autonomous zone," a nod to protesters who claimed control over a Seattle neighborhood in June.

The bar has been fined thousands of dollars as it continued to serve patrons inside and to operate past the 10 p.m. curfew for restaurant service that Cuomo imposed citywide.

According to a release from Sheriff Joseph Fucito, plainclothes deputies went inside Tuesday and ordered food in exchange for a mandatory $40 "donation." Uniformed deputies went in then and issued tickets for state and city violations.

Presti, 34, was uncooperative and was charged with obstruction of governmental administration in addition to the charges stemming from unauthorized food and beverage service, the sheriff said.

Gelormino was there during the bust and was also ticketed.

A suspect is dead after a shootout in which two U.S. Marshals and an NYPD detective were wounded in the Wakefield section of the Bronx.

Coronavirus by zip code - New York City
Do you have coronavirus symptoms?
Where to get tested for COVID-19 coronavirus
New CDC guidelines on masks
How coronavirus changed the New York region 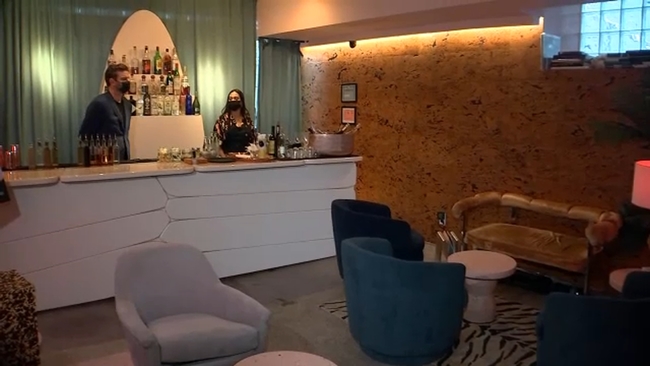