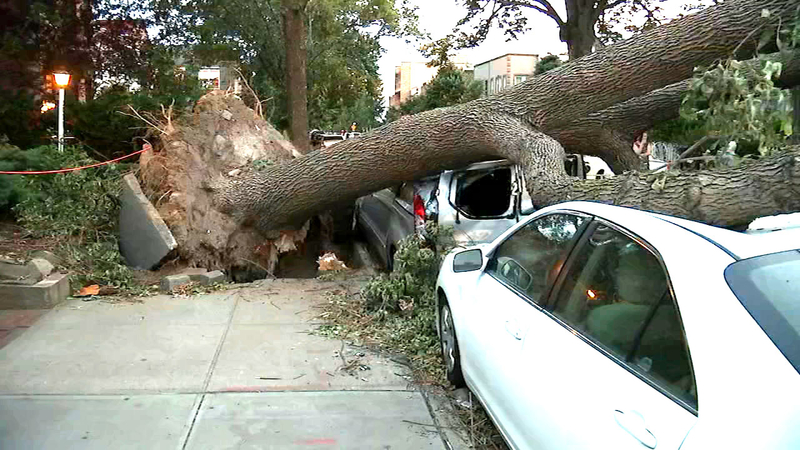 NEW YORK (WABC) -- The torrential rains and strong winds from fast-moving Tropical Isaias dealt such a wallop that millions were left without power in the Tri-State area, and governors had to put into place emergency orders to speed up the recovery.

Nearly 2.5 million people lost power in the region. Con Edison said the number of power outages from Isaias was the second-largest in the company's history. Only Superstorm Sandy in 2012 caused more.
EMBED More News Videos

NEW YORK CITY
Despite some progress being made -- 12,000 fewer power outages on Friday morning than there were Thursday morning -- some New York City residents are still living in storm zones ravaged by Tropical Storm Isaias.

LONG ISLAND
Some 108,000 remained without power on Long Island Friday after Tropical Storm Isaias caused widespread damage, downing trees and power lines and leaving almost half of PSEG's 1.1 million customers in the dark at the peak of the outages.

HUDSON VALLEY
Dozens of National Guard troops have been sent to Putnam County to help in the cleanup and to provide assistance to residents. They are meeting at the Paladin Center in Carmel and will hand out supplies to those in need or deliver them to residents stuck in their homes.
EMBED More News Videos

NEW JERSEY
There are still more than 300,000 power customers in the dark in New Jersey on Friday. The vast majority are in North Jersey, which especially problematic during the pandemic when so many people are working from home.

Power is expected to be restored to 80% of New Jersey by Friday night. Some of the outages, however, could persist for days.
EMBED More News Videos

In addition to widespread power outages, downed trees continue to cause problems for NJ Transit.

CONNECTICUT
There is growing anger and frustration in Connecticut, where utility companies have hardly put a dent in the number of widespread outages from Tropical Storm Isaias.