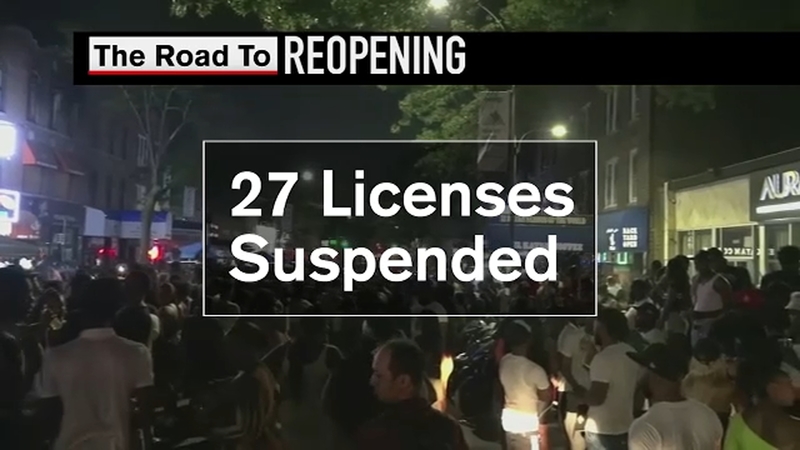 NEW YORK (WABC) -- A number of New York bars and restaurants took a hit from the state Tuesday amid ongoing crowding and social distancing violations.

"The state is taking action and we said we would take action on our own," Cuomo said. "We are quite serious about it. This is a very dangerous situation."
EMBED More News Videos

Locally, three bars in Queens and one in Suffolk had their liquor licenses suspended by the state for violation of outdoor dining regulations:

State officials explained their reasoning for each establishment:

Brik Bar at 32-16 Steinway Street in Astoria: Brik Bar is one of the worst offenders on Steinway Street in Astoria, Queens, where large crowds have assembled for drinking and partying. The bar had been warned and served with SLA violations for allowing crowds to congregate and drink outside on multiple occasions in June. They were observed again in flagrant violation of the Governor's EO's this past weekend on July 16th and again on July 18th, ultimately resulting in the NYC Sheriff 's Office serving the location with a cease and desist order on outdoor service, issued by the New York City of Department of Transportation.

M.I.A Made in Astoria at 27-35 21st Street in Astoria:In another problematic section of Astoria, M.I.A was found to be serving alcohol to dozens of patrons who were standing, drinking, and congregating - not dining -- well past the 11 p.m. NYC curfew for outside dining. M.I.A. had previously been cited and warned for earlier violations of the Governor's Executive Orders.

Live at the Maspeth Pizza House 59-60 55th Rd in Maspeth: Another repeat offender, Maspeth Pizza had been cited and warned on multiple occasions for serving alcohol to standing patrons who were congregating outside its location. On July 10th and 19th, SLA Investigators observed this premises continuing its unlawful service, including after the 11 p.m. curfew, with numerous patrons standing, dancing and drinking alcoholic beverages in violation of social distancing rules. Investigators also witnessed servers with no facial coverings and patrons smoking hookah, in violation of the establishments license.

Secrets Gentleman's Club in Deer Park, Long Island: On July 17th, investigators with the SLA and Suffolk County Police Department conducted an undercover inspection of Secrets Gentleman's Club in Deer Park. The detail observed employees and patrons inside the premises without face coverings, including dancers performing, sharing the same stage pole, and giving lap dances in violation of the Governor's EO's and SLA Guidelines. The evidence reflected that, when the owner was confronted by an SLA investigator about the problematic dancing, he claimed it must have started without his knowledge after he had left -- unaware that he had already been caught on video buying drinks for the undercover agents and bragging about getting away with violating the Executive Orders.

Neighbors along Steinway Street said they welcome the governor's get tough attitude, especially considering how New York has done such a good job with squashing coronavirus.

"The pictures I saw on social media indicated that things were way out of hand," Astoria resident Denis Ryan said. "It looked like a big block party."

Another Astoria resident, Victoria Vajda, said she thinks it's irresponsible of the business owners to be greedy and let people get out of hand.

"I think they should listen to the governor's advice and stay safe," she said.

The governor added that one of the issues New York is having is that there is no separate restaurant and bar license. Cuomo said that the state opened up outdoor dining, but was not meant to be for a bar operation.
EMBED More News Videos

Cuomo said it's unfortunate for the bar and restaurant owners who have played by the rules.

"The bad operators will make it worse for themselves and for the good operators," he said. "I understand bars are under terrific economic pressure as are many other organizations, and they took this outdoor dining as an opportunity to do outdoor drinking, but that's not what the regulations intended. Right?"

On Monday, Cuomo warned of a potential rollback on the reopenings of bars and restaurants if they don't get their act together.
EMBED More News Videos

Cuomo called on local governments to dispatch police to disperse crowds that have been gathering outside some bars and restaurants offering outdoor dining and curbside pick-up of alcoholic beverages.