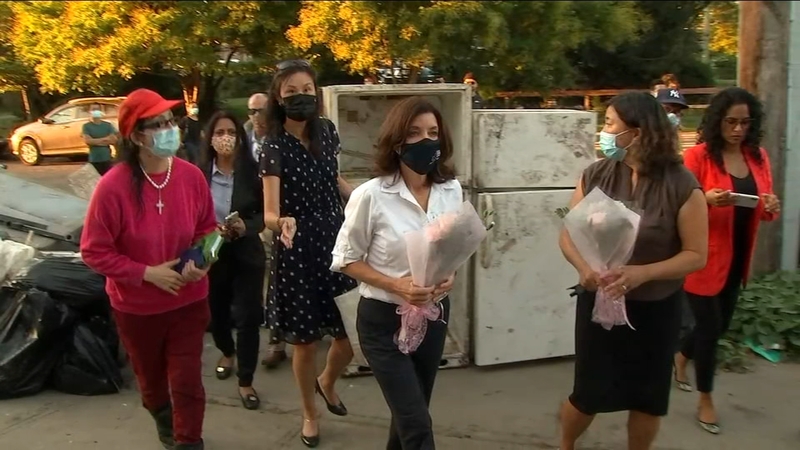 Biden declared climate change "everybody's crisis" after touring the neighborhoods severely damaged by Ida. He said it's time for America to get serious about the danger or face even worse lose of life and property.

He planned to use the muddy backdrop to call for federal spending to fortify infrastructure so it can better withstand such powerful storms, with his plan calling for $1 trillion in infrastructure spending nationwide currently pending in Congress.

"I'm hoping to be able to see the things we are going to be able to fix permanently with the bill that we have in for infrastructure," Biden said as he left the White House, when asked what he hoped to see on the tour.

Eyewitness News was at JFK International Airport as Air Force One touched down around 11 a.m. The president was greeted by Governor Phil Murphy and First Lady Tammy Murphy before walking the tarmac to Marine One, which took him to his first meeting.

President Biden arrived in NYC to tour storm damage left behind by Ida.

Biden first visited Manville, where fires broke out in swamped homes and businesses Friday, many of which were inaccessible to firefighters because of Ida's floodwaters, and his visit comes as the need grows for more help.

The president met with state and local leaders in Somerset County to discuss their needs, and Murphy made good on his promise to ask Biden to include more counties for federal aid. The current disaster declaration includes Bergen, Gloucester, Hunterdon, Middlesex, Passaic, and Somerset counties.

Biden expressed condolences to the families of those who died and listed help being provided by FEMA.

"You really took a hit," he said. "The losses we witnessed were profound."

Biden went house to house in the flood prone section known as the Lost Valley, where front yards are littered with furniture and clothing ruined by the storm. He talked with the residents and hugged a little boy who approached him before walking up to one of the houses that burned down.

Ducking under the yellow tape, he approached the front steps, now leading only to a pile of rubble.

Many businesses on North Main Street have been wiped out, with garbage and debris piled high on curbs. Inside, there are signs of the water that rose two to three feet and destroyed anything in its path. Residents face a long rebuild.

In Manville alone, it will cost millions just to return life to normal for residents and businesses still working to clean up.

Still, folks insist everyone in the town is pulling together to help in this time of need -- and they hope the federal government will come through.

President Biden then headed to New York City, where residents in Woodside are still busy throwing out damaged belongings and drying out what they can salvage.
EMBED More News Videos

CeFaan Kim has more on President Biden's stop in Queens to survey the damage brought by remnants of Ida.

But they are also hanging up American flags and Yankee jerseys, showing their New York pride and ready for any help the president will offer.

"We just want to see some change back here," resident Jonathan Rojas said. "Because we never expected anything like this. It looked like an Olympic swimming pool back here. It was crazy."

Basements and cars were wiped out by more than five feet of flood waters, and as demolition continues, the recovery has barely begun.

The president walked down the dusty Queens alley of broken asphalt and now broken dreams, dodging the occasional puddles with senators Schumer and Gillibrand, Mayor de Blasio and Gov. Hochul by his side.

"I wish every American could walk down this alley with me to see and talk the people who are devastated, just talk to them," Biden said. "This is America, where I am standing right now."

Biden warned the storms are going to get worse and people need to listen to the scientists and the economics who say it's a code red.

He said when he thinks about climate change, he thinks of "jobs, good paying jobs," with a wage of $45 to $50 per hour "plus health care. That's what is needed."

Biden ended by singling out a 7-year-old boy with an American flag.

"The thing about America, every time we end up with a problem, going into a serious circumstance, we come out better than we went in," Biden said. "That's because we're so diverse. That's America."

On Tuesday night, it was Governor Kathy Hochul who toured the damage and made promises. She went to East Elmhurst where she left flowers. She also prayed at the home where a father, mother and child all died in last week's flooding.

"I'm more than a governor of this state, I'm a human being ... I'm a mom," Hochul said. "A mother, father and a child were lost in this place, you can't help but let it affect you."
EMBED More News Videos

Gov. Kathy Hochul reflects on the devastating damage caused by Ida in New York City and what she is committed to doing to help the community.

The Federal Emergency Management Agency is making $35,000 grants available to the owners of homes that suffered damage in the flood, and that might help. But it requires navigating a bureaucracy that many find daunting.

"Language. Access. A lot of the info is in English ... and it makes it harder for a predominantly immigrant own," Kenneth Chiu said.

Residents who can't even prepare their own meals anymore, got dinners from a food bank.

Over the holiday weekend, Biden approved disaster declarations for both New Jersey and New York.

In New York, the president's approval made federal funds available to affected individuals in the counties of Bronx, Kings, Queens, Richmond, and Westchester.

The assistance can include grants for temporary housing and home repairs, low-cost loans to cover uninsured property losses, and other programs to help individuals and business owners recover from the effects of the disaster.

The historic flooding claimed the lives of 13 people in New York City, many of whom lived in illegally converted basement apartments in Queens.

As a result, Mayor Bill de Blasio announced a task force and more drastic storm response plan to avoid such catastrophes in the future.

In New Jersey, Ida's flooding claimed the lives of at least 27 people, with four people still missing across the state, and the death toll is likely to rise.

Six people were killed in Westchester and one in Connecticut.