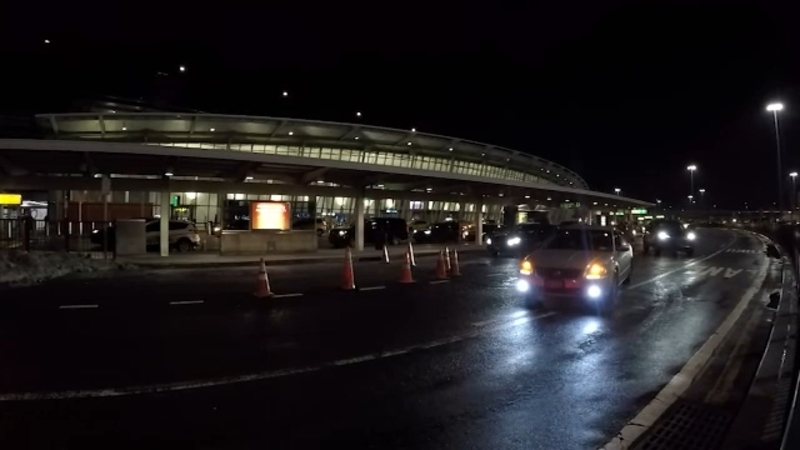 Virgin joins Delta, British Airways to test those coming from UK to NYC

The news comes after New York Governor Andrew Cuomo and New York City Mayor Bill de Blasio questioned why six flights are arriving at JFK Airport daily from the United Kingdom, despite a new variant of the coronavirus spreading there.

"This is very concerning, this new strain they have found in the U.K.," Cuomo said Monday during his briefing. "The strain, according to Boris Johnson, is 70% more transmittable. They don't know if there is any higher rate of death. They don't know if the vaccine is as effective with the new strain. 'A working assumption' is that the vaccine works."

Cuomo said 120 countries now require a negative test before arriving from the U.K., and some European countries have begun closing their borders. The U.S. has not, however, and Cuomo called that "reprehensible."

"This is reprehensible because this is what happened in the spring," he said. "Coronavirus is in China. No it wasn't, it's in Europe. It came from Europe and we did nothing."

Cuomo continued to reiterate his concern on Monday night.

"We'll have flights into other parts of the country and then those people can get on flights and come back to New York or infect other states," Cuomo said. "This whole notion that any one state can protect itself was foolish from the beginning."

At the very least, Cuomo said the three airlines flying into JFK Airport from the U.K. should require passengers test negative before flying.

"The U.S. should do what other countries have done, which is halt the travel," he said.

Cuomo announced British Airways will test all passengers coming from U.K. to New York City starting Tuesday, adding New York to the list of 120 countries identified by the governor that is already mandating pre-flight testing.

"My request is simple: Please add New York to the list of 120 countries," Cuomo said. "As governor of New York state, I have asked them to do that."

Delta Air Lines has also agreed to require a negative coronavirus test before allowing passengers to fly from the U.K. to Kennedy Airport.

"Delta, along with our partner Virgin Atlantic, will be requiring new pre-departure COVID-19 testing for all our customers traveling from the U.K to the United States effective Thursday December, 24," the airline said in a statement. "Customers will be required to take a LAMP or PCR test up to 72 hours prior to departure adding another layer of safety when they travel. We will be contacting customers due to travel on our London Heathrow to Atlanta and New York-JFK services in the coming days to provide further information regarding recommended suppliers and testing requirements. We also recommend customers who are scheduled to depart from the U.K. to the United States to monitor delta.com in the coming days for full details of what will be needed before they fly. Delta will be working closely with Governor Cuomo's office on the implementation of our plans as they specifically relate to our flights from London Heathrow to New York-JFK. The health and safety of customers and employees remains Delta's No. 1 priority. Customers onboard Delta's COVID-tested flights will additionally benefit from the more than 100 safety and cleanliness initiatives the airline has implemented across its operation."

De Blasio called for restrictions beyond the U.K.

The big concern now is the new mutation of COVID-19 blamed for rapid spread in Southern England.

"As prime minister, it is my duty to make difficult decisions to do what is right to protect the people of this country," UK Prime Minister Boris Johnson said.

In an emergency address, Johnson delivered grim news for Christmas. A large part of the country, including London, is back on lockdown with restrictions on gatherings limited to household only.

Approximately 21 million people are affected, and only essential businesses can remain open. De Blasio said it's time for bold action.

"It's time for a travel ban, from Europe, given what we are seeing from this new strain," he said. "Or at minimum, a requirement that anyone getting on a plane has proof they have a negative test coming out of Europe. We need to be aggressive. This is a decisive moment."

The new variant so far doesn't seem to cause more severe symptoms or lead to more deaths, but scientists say it spreads 70% faster -- and that's putting a strain on British health services.

And it has other countries banning travel, sealing off Britain, and Cuomo said he doesn't understand why the U.S. hasn't acted.

"Right now, this variant is getting on a plane and flying to JFK today," he said. "One hundred and twenty countries demand that before you get on a flight in the UK to come to their country, you have to have tested negative. The United States does not require it."

Cuomo said Port Authority has no authority to ban passengers or monitor the health of passengers, rather that responsibility falls on the federal government.

"Where is HHS? Where is CDC? Where is NIH?" he said. "This is the same mistake and literally six flights a day, and all it takes is one person."

Experts say viruses mutate regularly, but many of these changes have no effect on how easily the virus spreads.

COVID-19 vaccine: When will you be able to get one? Find out where you are in line
EMBED More News Videos

ABC7 Chicago's Mark Rivera walks you through how to use the COVID-19 vaccine calculator to find your place in line to get the shot.

COVID Vaccine Calculator: Find out how many people may get a COVID-19 vaccine before you
Do you have coronavirus symptoms?
Where to get tested for COVID-19 coronavirus
WATCH: Eyewitness to a Pandemic