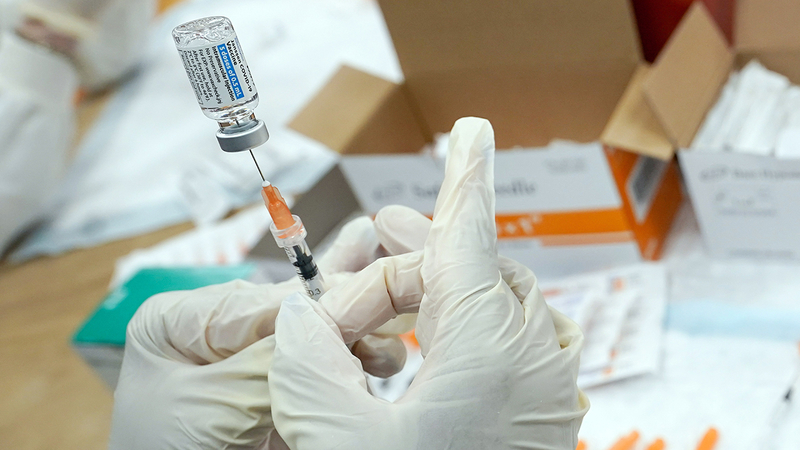 NEW YORK CITY (WABC) -- New COVID testing sites are now open in New York City, as officials across the region and the country scramble to meet a rising tide of cases fueled by the omicron variant.

In addition, the city is encouraging people to get their booster shots if eligible. Mayor Bill de Blasio announced a new $100 incentive for booster shots given at city-run sites before December 31.
EMBED More News Videos

"Go get that booster now," he said. "We want everyone as quickly as possible to go get those boosters, and we are going to make it even better for you with a new incentive -- and an incentive that is here just in time for the holidays. Out there shopping for their families, it would be nice to have a little extra cash. So as of today, we are announcing a $100 incentive for everyone who goes out and gets a booster here in New York City between now and the end of the year."

The full list of city-run sites is available at nyc.gov/Vax4NYC.

De Blasio once again predicted a rough road ahead, at least for several weeks.

"It's going to be a challenging few weeks, no question about it," he said. "We are seeing a big upsurge in cases."

Still, he said shutdowns were avoidable.

"No more shutdowns," he said. "We've been through them. They were devastating. We can't go through them again. In this case, we weather the storm because we were prepared with a high level of vaccination already, prepared with a strong health care system, prepared to get through. We need to all work together to get through these weeks, come out the other side, continue our recovery. No shutdowns, because that would devastate the lives of so many New Yorkers."

While the city is not shutting down, numerous Broadway shows have canceled performances for the rest of the week due to the spike in cases.

Seven public schools are also closed due to coronavirus cases, Mayor de Blasio said, up from four on Monday. The mayor seemed to acknowledge staffing problems in the situation room, which provides real time reporting of cases in schools. He says they have "doubled the staffing."

New testing site openings around the city come one day after city officials reported a new single-day record for positive cases with 15,245, as more shows on Broadway were forced to cancel performances, and as the NHL paused its season.

With ballooning wait times, de Blasio said the demand for COVID tests is "unlike anything we've ever seen before."
EMBED More News Videos

Chantee Lans reports from the Upper West Side on the city's efforts to meet surging demand for COVID tests.

At the same time, he admitted that the most helpful remedy -- at-home testing kits -- are in short supply, both from private companies and the federal government.

One of the sites opening Tuesday is in Washington Heights, one of eight new brick-and-mortar locations in addition to 17 mobile trucks deploying across the city. De Blasio said that by the end of the week, a total of 112 city-run sites will be operational.

However, the lines at those sites, while sometimes shorter than those at privately run locations, can still involve long wait times.

"I will say that many of the private facilities are reporting three-hour waits, not one-hour waits," NYC Health + Hospitals CEO Dr. Mitchell Katz said.

City health officials said that whenever they receive more at-home rapid tests, they will distribute them to people in line for in-person tests.

"If you come to one of our sites, you can choose to wait in line or you'll be able to walk away with a home kit," said Dr. Ted Long, the city's head of COVID testing and contact tracing.

"As much as testing is crucial, the first thing we need to do with our resources is vaccinations," he said.

The city is also planning to send out Test and Trace Corps members to establish quality control at testing sites in the city that are run by outside vendors.

"Getting tested is absolutely crucial, and making sure we have enough sites, enough resources, enough test kits," de Blasio said. "We're working on all these fronts. Not a surprise, we are finding supplies are becoming a challenge because all over the country testing is going up suddenly."

"That may mean hosting virtual gatherings or moving activities outdoors...masks, same day tests and distancing," he said. "I do advise older adults and others with higher risks to skip optional activities, particularly in crowded settings, particularly for the next few weeks."

De Blasio says he'll make a decision this week on any possible changes for Times Square on New Year's Eve, but for now, preparations are moving forward with a traditional celebration.