The investigation is focused on a door that should have closed automatically but did not.
WABC
By Eyewitness News 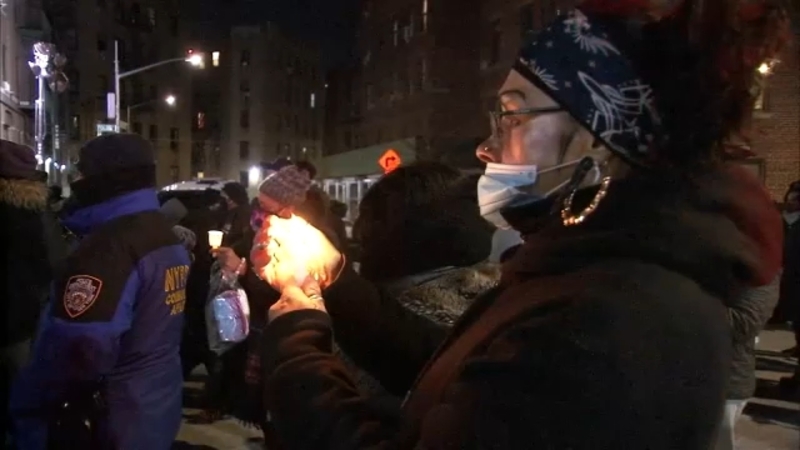 Vigil held for victims of catastrophic fire in the Bronx

TREMONT, Bronx (WABC) -- A vigil was held Tuesday evening for the 17 victims of the deadly fire in the Bronx over the weekend, this as the investigation continues into why the building filled so quickly with smoke.

All 17 fatalities from Sunday's high rise fire in the Tremont section were due to smoke inhalation, the medical examiner's office ruled Tuesday.

Fourteen out 17 of the victims killed in the fire have now been identified. The agency is still working to confirm the remaining identities of the deceased.

"OCME is working with the affected families to confirm the IDs of victims through a careful forensic process and expedite the release of their loved ones for final arrangements," a spokesperson said. "This is deliberate but steady work, with some IDs confirmed and decedents released to funeral homes already. I expect that names will be shared by PD officially once the work is closer to completion."

Bill Ritter talks to Bronx Borough President Vanessa Gibson about Sunday's deadly apartment building fire and when residents could be allowed back in.

The fire started in a third floor duplex of the Twin Parks Towers North West, and part of the investigation is focused on doors that should have closed automatically but did not.

At a vigil Tuesday night, elected officials representing this traditionally forgotten community, expressed their anger at the horrifying and completely preventable disaster.

"When those doors don't close but the laws have been passed, we say where oh where is the penalty for those laws not being enacted and acted upon because we have passed them in the council," City Council Speaker Adrienne Adams said.

There most certainly will be a reckoning, but in this community, there is only grief.

FDNY Commissioner Daniel Nigro said the deceased were taken to seven different hospitals, and he explained a revision from 19 to 17 fatalities as the result of a double count in two cases.

However, he said there remain critically injured victims and he braced the community for a possible increase in the death toll.

About 200 firefighters battled the five-alarm blaze inside the apartment building, located at 333 East 181st Street, just before 11 a.m. Sunday.

At least 44 people were injured, with 13 said to be "clinging to their lives" in nearby hospitals. Several are intubated.

Darla Miles has more into the ongoing investigation into the safety doors that failed to close, causing the stairwell to act as a chimney.

Nigro said the FDNY is certain the cause was a malfunctioning electric space heater that set a mattress on fire.

FDNY sources tell Eyewitness News that the apartment where the fire started had multiple space heaters running at the same time. One of of the space heaters, which sparked the fatal fire, had been left on for days.

While the fire was contained to the duplex where it started on the second and third floors and the adjacent hallway, the smoke traveled throughout the building.

Mayor Eric Adams said his takeaway from the fire is "close the door," and that the city would be reminding New Yorkers of that message.
EMBED More News Videos

Mamadou Wague told Eyewitness News reporter Josh Einiger that fire started in his duplex where he lives with his wife and eight kids, one of whom was trapped on a burning bed.

Wague has burns on his nose from when he leapt through the flames to rescue his daughter, who is burned but alive.

"We were sleeping and my kids were screaming, saying 'Fire, Fire!'" he said. "So I see the fire in the mattress, and I told everybody, 'Get out, get out.'"

Smoke alarms were operable, but the open door allowed heavy smoke to spew out through the building and into the stairwells as residents tried to escape.

"They are self closing, but the door on 15 and the door to the fire apartment were not functioning as they should," Nigro said. "The door was not obstructed. The door when fully opened stayed fully opened because it malfunctioned."

Nigro said the door to the fire apartment "was so deformed from the heavy fire that our marshals are having very great difficulty determining exactly why it wouldn't close," and that marshals will "probably be able to determine on the 15th floor, why that door was open and why that allowed smoke to penetrate that entire hallway and into apartments on 15 and cause such a horrendous condition."

"Had it not been for these heroic efforts of both fire and EMS and also at the hospitals, this death toll could have been double what it was," Nigro said.

A city official says the building's owners told them all the doors are self closing and that building workers confirmed the self closing mechanism was operational on the fire apartment door when the lock was repaired last July.

Investigators tested the self closing mechanisms on all doors in the building Sunday and most worked, though the door on the fire apartment did not, as well as a couple others.

"It was absolutely horrific," Firefighters Association President Andrew Ansbro said. "I talked to many veteran firefighters who said it was the worst fire they had seen in their lives. They were doing CPR on people outside. It was absolutely horrific. Members operated with upmost heroism. Unfortunately, not all fires have a positive outcome. It's horrible. This fire will be with these members forever."

The patients are spread out among hospitals like Jacobi Medical Center, Westchester Medical Center and New York Presbyterian Hospital/Cornell.

"My heart is with the loved ones of all those we've tragically lost, all of those impacted, and with our heroic FDNY firefighters," Governor Kathy Hochul said. "The entire state of New York stands with New York City."

"I dropped on my knees and started to pray to God, 'God, please help us.' It was too much," she said. "I lived in this building over 30 years. I've never seen anything like this."
EMBED More News Videos

Josh Einiger has more on the catastrophic apartment building fire in the Bronx that killed 17. He speaks to one of the first residents let back into the building Monday.

Meanwhile, neighbors are rushing to help.

"My kids and I agreed to donate jackets, baby clothes, cereal, whatever we had at home that we could spare, I'm giving away now," area resident Johnanna Bellevue said. "We live here. We're a community, so one hand washes the other."

The building was emptied of residents Sunday night, but some were able to return to Twin Parks North West Monday night to both retrieve items and move back in if they choose to do so.

However, this does not apply to the floor where the fire started, as the DOB has not yet lifted their Partial Vacate Order which applies to the third floor of the building.