Coronavirus Vaccine Updates: U.S. daily death average under 300 for 1st time in over a year 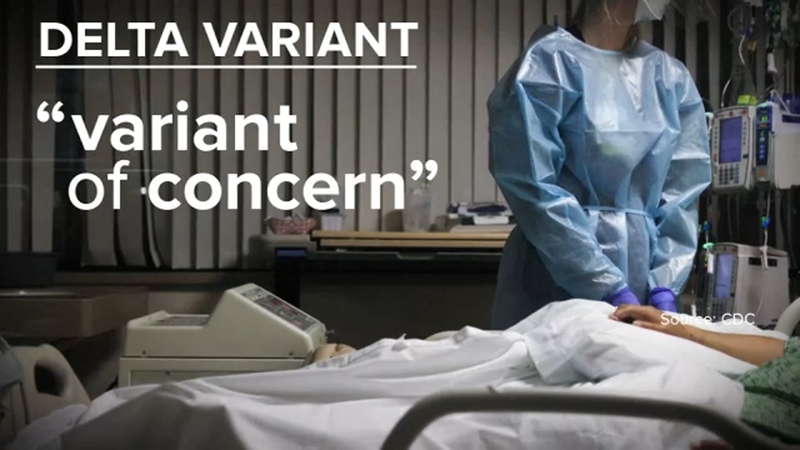 NEW YORK (WABC) -- As the U.S. reports many of its lowest COVID-19 metrics since the onset of the pandemic, the CDC is now predicting in its weekly virus forecasts that the country's steady viral decline will likely continue in the weeks to come.

Nationally, daily deaths, new cases, and hospital admissions are all expected to decrease over the next four weeks.

On the heels of the country's grim milestone of 600,000 confirmed lives lost to coronavirus, for the first time since March 27, 2020, the U.S. daily death average has fallen below 300, down by nearly 22% in the last week. Newly reported deaths are expected to decrease in 8 jurisdictions, while trends are forecasted to remain uncertain or stable in other states and territories.

The U.S. daily case average remains around 12,000 for the second consecutive day, still falling by 9.7% in the last week. A reminder, however, that data is becoming increasingly inconsistent, as more states opt to not release daily COVID-19 reports. Additionally, only about 9% of U.S. counties have high community transmission in last 7 days, compared to over 45% of counties just nine weeks ago.

Testing levels remain at the lowest point in nearly a year, with the country now between 600,000 and 700,000 tests a day on average.

Social distancing and mask requirements at the ballpark have been eased effective immediately. Fans no longer need to show proof of a negative COVID test and/or vaccination to enter the ballpark with a valid ticket.

However, students, staff and those in attendance must still wear face coverings, health screenings are still required and social distancing is required.

UK unions react angrily to reports of required COVID-19 vaccinations for care home staff
British labor unions reacted angrily Wednesday to reports that the government plans to require COVID-19 vaccinations for people who work in care homes for older adults in England. Newspapers, including the Guardian and the Times of London, reported that the government plans to introduce the requirement after deciding that vaccinating care home workers would protect vulnerable residents.

Can a workplace require the coronavirus vaccine? Here's what we found
As California reopens, many people will have to return to their office after working from home for more than a year. But in order to return to the workplace, many are wondering if being vaccinated will be required.

Doctors explain psychological impact ditching masks will have on society
Our masks were a symbol of responsibility, of protecting other people. Now that several states are going maskless, is continuing to wear one a sign of vulnerability or even paranoia? Doctors say there is psychology at play.

NYC vaccination rates by zip code
The state of New York launched fireworks Tuesday night in celebration of New Yorkers reaching a 70% vaccinate rate, but for many communities, the celebration came too early. There are about a dozen communities in the New York City area where three out of four people have not been vaccinated yet. 7 On Your Side Investigates created a map where the darkest colored zip codes have the most vaccinated New Yorkers and the lightest, the least.

Rutgers football returns to full capacity at stadium
Rutgers football will be welcoming fans in full attendance when it opens the 2021 season at SHI Stadium, the university announced. The announcement follows updated state guidance allowing outdoor venues to operate at full capacity. The Scarlet Knights will host six home games during the 2021 season, including a primetime kickoff against Temple University to start the Labor Day Weekend on Thursday, Sept. 2.

"Everything is ready to go," de Blasio said. "Obviously, the situation is greatly improved. All of our planning is in place. We know exactly what shelters we are going to bring people back to. We are ready to go. What we need is authorization from the state of New York."
Advertisement

When the pandemic started, the city moved more than 12,000 homeless people out of crowded shelters and into more than 60 hotels to keep them safe and socially distanced. However, concerned neighbors have said that while the city fixed one problem, it created another -- including huge quality of life issues in the surrounding neighborhoods.

NYC to hold vaccination contest for $2,500 prizes in July
Mayor Bill de Blasio announced Wednesday residents who get vaccinated at New York City-run sites now have the chance to win $2,500. The contest includes 10 money prizes given out each week through the month of July. The mayor says for those who have not been vaccinated, all they have to do is make the appointment to qualify.

"This is a real opportunity after everything everyone has been through," de Blasio said. "I think the vast majority of New Yorkers could really use $2,500 right now. Make a big difference in your lives."

Back at full capacity in the Bronx.

"We have hit 70% vaccination," a triumphant Cuomo said Tuesday, meaning the state can "now return to life as we know it."

NY Philharmonic plans 80 concerts at two Lincoln Center venues
The New York Philharmonic announced the dates for it's new season, which begins September 17. They are planning about 80 concerts, down from 120 in a normal year. With the orchestra's home, David Geffen Hall at Lincoln Center, in the midst of a $550 million renovation, most concerts will be at two other venues, Alice Tully Hall and the Rose Theater. Four concerts will be held at Carnegie Hall, and there will be a holiday run of "Messiah" at Riverside Church. The orchestra will present three Sunday matinees, its first since the 1960s, to broaden its audience. There will be no intermissions, at least through December, to discourage gatherings, and the orchestra will follow health guidance.

US COVID-19 death toll hits 600,000, equal to yearly cancer toll
The U.S. death toll from COVID-19 topped 600,000 on Tuesday, even as the vaccination drive has drastically brought down daily cases and fatalities and allowed the country to emerge from the gloom and look forward to summer. The number of lives lost, as recorded by Johns Hopkins University, is greater than the population of Baltimore or Milwaukee. It is about equal to the number of Americans who died of cancer in 2019. Worldwide, the COVID-19 death toll stands at about 3.8 million. The real totals in the U.S. and around the globe are thought to be significantly higher, with many cases overlooked or possibly concealed by some countries.

More evidence suggests COVID-19 was in US by Christmas 2019
A new analysis of blood samples from 24,000 Americans taken early last year is the latest and largest study to suggest that the new coronavirus popped up in the U.S. in December 2019 - weeks before cases were first recognized by health officials. The analysis is not definitive, and some experts remain skeptical, but federal health officials are increasingly accepting a timeline in which small numbers of COVID-19 infections may have occurred in the U.S. before the world ever became aware of a dangerous new virus erupting in China.
"The studies are pretty consistent," said Natalie Thornburg, of the Centers for Disease Control and Prevention.

Over 800 New Yorkers given expired COVID vaccine
A pop-up vaccination site at the former site of Times Square's NFL Experience informed 899 patients that they need to be re-vaccinated after receiving expired Pfizer doses. The city's Department of Health says they've "communicated with Pfizer, which recommended that the patients receive another dose as soon as possible. While there is no safety risk for the patients, the re-administration is being carried out to ensure that the individuals are fully protected."

Long Island school district denies student's mask exemption request from family pediatrician
A medical consultant for the New York State Education Department overruled a request from the pediatrician of an elementary school student on Long Island that she not be required to wear a mask outdoors due to her asthma, according to documents obtained exclusively by Eyewitness News.