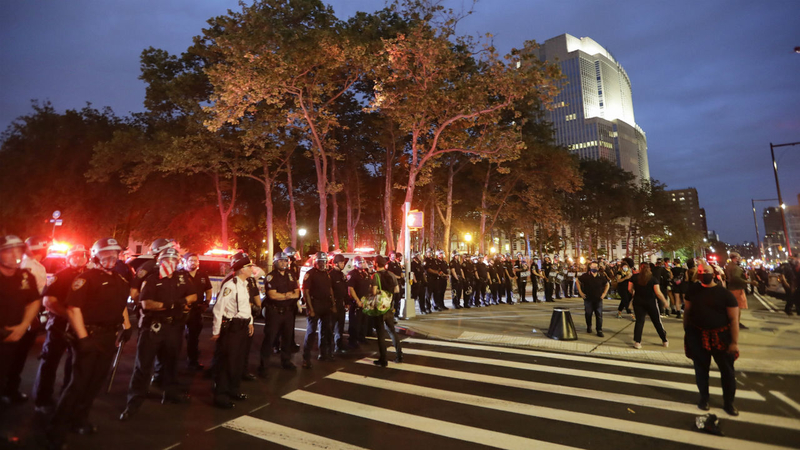 NEW YORK CITY (WABC) -- A former top cop in the NYPD says the department utilized a series of tactical moves to help restore order across New York City after days of unrest.

Other than the city-mandated curfew, one of the most important things the NYPD did Tuesday night to quell the looting and chaos was to ban vehicular traffic below 96th Street.

Police chose this as the cutoff because at that point, southbound traffic on both the FDR and the West Side Highway can be redirected back uptown.

It's one of a series of tactical moves made to disrupt the criminal pattern they saw in the previous 48 hours.

On night two of the curfew, Manhattan was sealed off. Thousands of officers blocked entry at the Manhattan and Brooklyn bridges.

With less traffic and protestors clogging streets, it was easier for police to respond, surging the city with thousands of more cops.

"When you do a curfew, it has to be cover of darkness, it must be, because that's when the bad guys come out," said retired NYPD Chief of Detectives Robert Boyce.

Meanwhile the city deactivated electric scooters, Citi Bikes, and Uber and Lyft after suspects were spotted using them to zip around town to case their targets and move supplies for vandalism.

That was a major advantage for cops in vehicles -- making it more difficult for looters on foot to move stolen goods.

Cops also removed trash cans which were being used to break windows and set ablaze.

And in Brooklyn and Queens, not near of any protests, they seized pre-staged bricks and rocks that were being moved in at night.

"Those water bottles are often filled with cement, we had vehicles that would appear as if our doors were hit by a Louisville slugger swing by Mark McGuire," NYPD Commissioner Dermot Shea said.

"The NYPD stepped back yesterday morning and said we are dealing with something different and we have to defend differently and address it differently and they did," said NYC Mayor Bill de Blasio.

But even before the curfew went into effect, police chased down a number of suspects in SoHo.

They recovered hammers, bats, and other tools as well as a tremendous amount of stolen merchandise.

But how did police know which vehicles to look for?

One of the most helpful tips came from a resident in Chelsea who told police she saw cars drive up, let off looters, unload power tools and drive away.

Then those cars would come back later to pick them up and move onto the next target.

She told police they were organized and had out-of-state license plates.

The NYPD of course has one of the most sophisticated license-plate reader systems in the world.

"We're seeing plates from Iowa, Minnesota, Colorado," Boyce said. "This is a tourist city there's no question, but this is a bad time for tourism right now. Why are they coming into the city?"

Former Chief Boyce says in that way, the coronavirus shutdown could be helping law enforcement.

And he says just because you may have looted and gotten away with it now, doesn't mean police won't eventually track you down.

RELATED STORIES:
Tuesday coverage of protests and looting in NYC