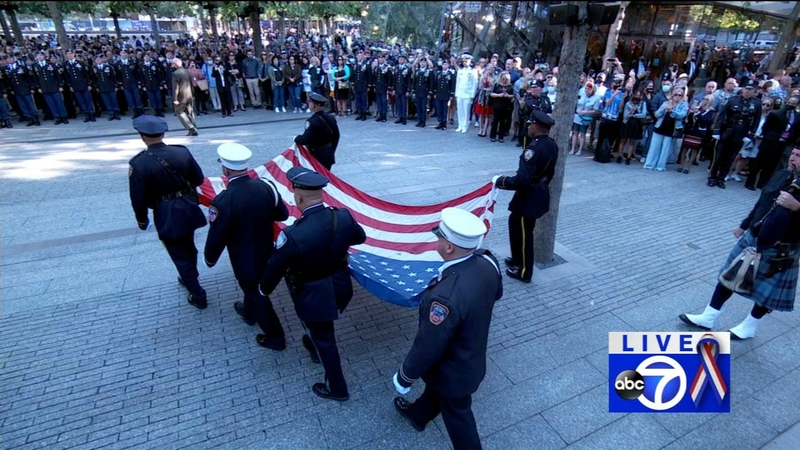 NEW YORK (WABC) -- New York City and the nation on Saturday marked 20 years since the 9/11 terror attacks with solemn remembrances and vows to "never forget."

On a morning much like September 11, 2001, families of the victims returned to Lower Manhattan to remember their loved ones who perished.

RELATED | Reading of the names

Bruce Springsteen and Broadway actors Kelli O'Hara and Chris Jackson sang at the commemoration, but by tradition, no politicians spoke there.

The reading of the names ended shortly before 1:00 p.m.

The Tribute in Light returned at sunset to shine into the night sky from the rough footprints of the Twin Towers.
EMBED More News Videos

The families of the World Trade Center victims returned to Lower Manhattan for the remembrance ceremony to read the names of the lives lost on September 11, 2001.

Updates from the 9/11 Remembrances Across America

Bidens participate in wreath-laying ceremony at the Pentagon

President Joe Biden and First Lady Jill Biden visited the third 9/11 memorial this afternoon, participating in a wreath-laying ceremony at the Pentagon

Bidens pay respect at Shanksville
President Biden and the first lady joined a wreath-laying at the Flight 93 memorial. They also walked hand in hand onto a field near the memorial.

Pres. Joe Biden participates in a 9/11 observance in Shanksville, Pennsylvania, as the nation remembers those lost in the attacks on September 11, 2001, 20 years later. https://t.co/zddfpwgWEm pic.twitter.com/FGFegy6vgj

VP Harris speaks at Shanksville
Vice President Kamala Harris began her remarks at the Flight 93 memorial with words for those who lost loved ones on Sept. 11.

Harris said Sept. 11, 2001 showed the power of unity among strangers and that sentiment is still powerful 20 years later.

George W. Bush speaks at Shanksville
The victims and heroes of Flight 93 are being commemorated at a ceremony at the site where the plane crashed in a Pennsylvania field on Sept. 11, 2001.

Former President George W. Bush reflected on the bravery of the passengers amid the carnage taking place throughout the country.

"We learned that bravery is more common than we imagined, emerging with sudden splendor in the face of death," Bush said.

Bush, who was president during the attacks, commended the courage of the Flight 93 passengers and crew who are believed to have foiled an attack on the U.S. Capitol by leading the plane to crash in rural Pennsylvania.

"The 33 passengers and seven crew of Flight 93 could have been any group of citizens selected by fate. In a sense, they stood in for us all," Bush said. "The terrorists soon discovered that a random group of Americans is an exceptional group of people."

He encouraged Americans to put aside their political differences in the spirit of what he saw after 9/11.

Final moment of silence
A sixth moment of silence was held at the World Trade Center memorial at 10:28 a.m. to mark the time when the North Tower collapsed. "Hamilton" actor Chris Jackson performed "Never Alone."

A fifth moment of silence held at 10:03 AM, when United Airlines Flight 93 crashed in Shanksville, Pennsylvania on Sept. 11, 2001.

AMERICA REMEMBERS: A fifth moment of silence held at 10:03 AM, when United Airlines Flight 93 crashed in Shanksville, Pennsylvania on Sept. 11, 2001. https://t.co/eYCA4Qh7wN #NeverForget pic.twitter.com/ne4qIL6wyv

The moment the first tower collapsed
Eyewitness News reporter N.J. Burkett and photographer Marty Glembotzky rushed down to the World Trade Center on September 11, 2001. While shooting a standup right below the burning towers, the first tower began to collapse. N.J. talked about that moment with Bill Ritter prior to today's ceremony.

Bells tolls at the at the National September 11th Memorial & Museum and across New York City.

AMERICA REMEMBERS: A third moment of silence is held at 9:37 AM, when Flight 77 crashed into the Pentagon on Sept. 11, 2001. https://t.co/Z6K4es63xo #NeverForget pic.twitter.com/XhTAH3OQoZ 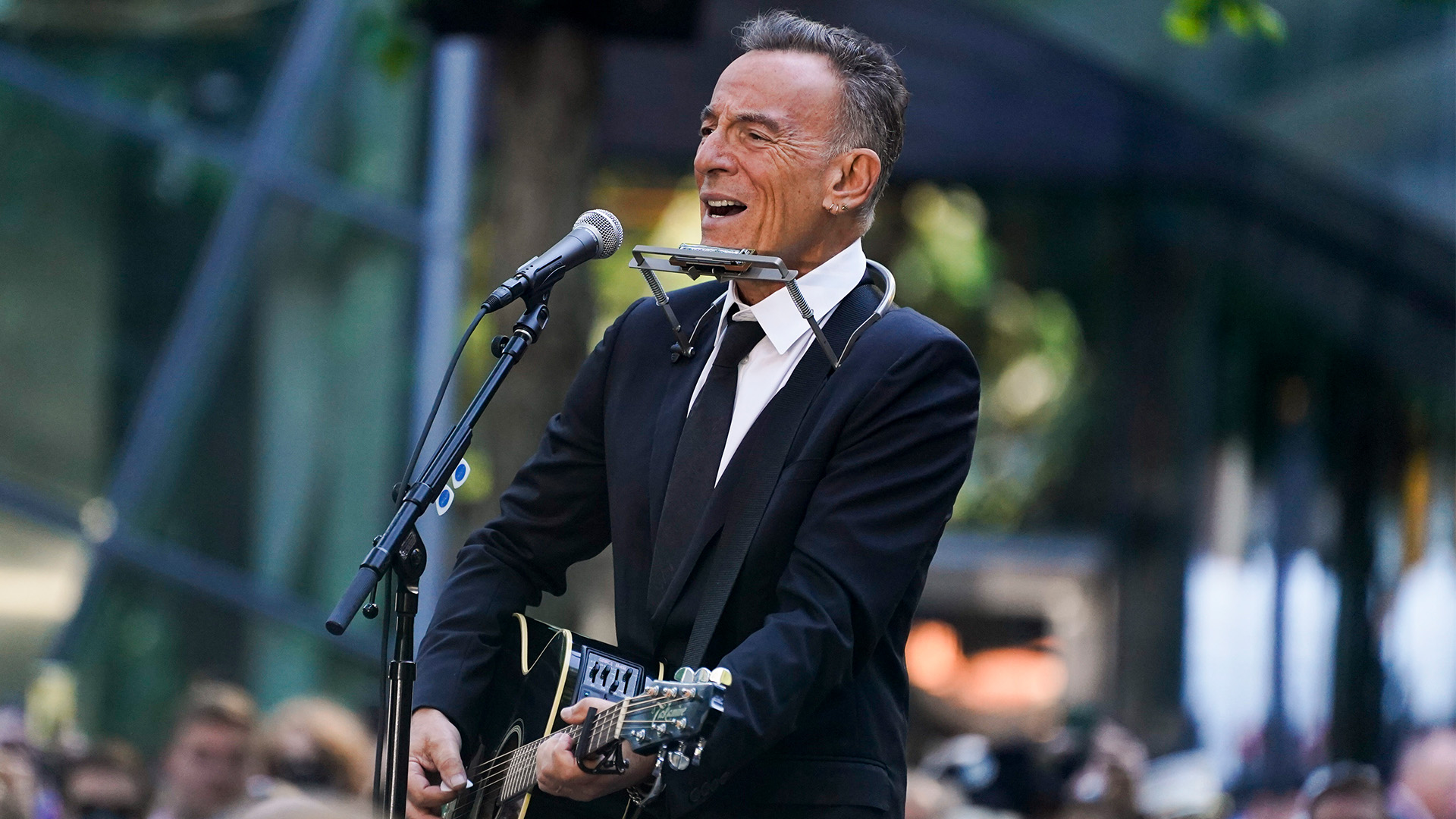 Bruce Springsteen performs during a ceremony marking the 20th anniversary of the Sept. 11, 2001, terrorist attacks at the National September 11 Memorial and Museum in New York

AMERICA REMEMBERS: A second moment of silence is held at 9:03 AM, when United Airlines Flight 175 crashed into the South Tower of the World Trade Center on Sept. 11, 2001. https://t.co/l4S9f2p6ii #NeverForget pic.twitter.com/u4wLr8K8vz

Reading of the names begins

Following the first moment of silence, families began reading the names of the lives lost on Sept. 11.

Mike Low, whose daughter Sara was a flight attendant on Flight 11, spoke before the readings began. While he said his family's pain is still raw, they have found comfort in the community and outpouring of support from all over the world.

"As we recite the names we lost my memory goes back to that terrible day when it felt like an evil specter descended on our world, but it was also a time when people went above and beyond the ordinary," Low said.

The ceremony at ground zero begins

At 8:46 a.m., a moment of silence was held and church bells rang across New York City to mark the time when American Airlines Flight 11 struck the north tower of the World Trade Center.

Watch the beginning of the September 11 remembrance ceremony.

Obama hails the heroes of 9/11 and afterward
President Barack Obama has lauded the heroes of 9/11 - and of the years since - in a message to mark the 20th anniversary of the terror attacks. "One thing that became clear on 9/11 - and has been clear ever since - is that America has always been home to heroes who run towards danger in order to do what is right," said Obama, who was U.S. President from 2009 to 2017.

Queen offers 'thoughts and prayers' on anniversary of 9-11
Queen Elizabeth II marked the 20th anniversary of the Sept. 11 attacks by offering her sympathies to the victims, survivors and families affected by the atrocity. In a message to U.S. President Joe Biden, the British monarch remembered the "terrible attacks." She says, "my thoughts and prayers - and those of my family and the entire nation - remain with the victims, survivors and families affected, as well as the first responders and rescue workers called to duty.''

Eyewitness News reflections, photos and stories marking the anniversary of 9/11

How Port Authority Pipes and Drums Band rebuilt after 9/11