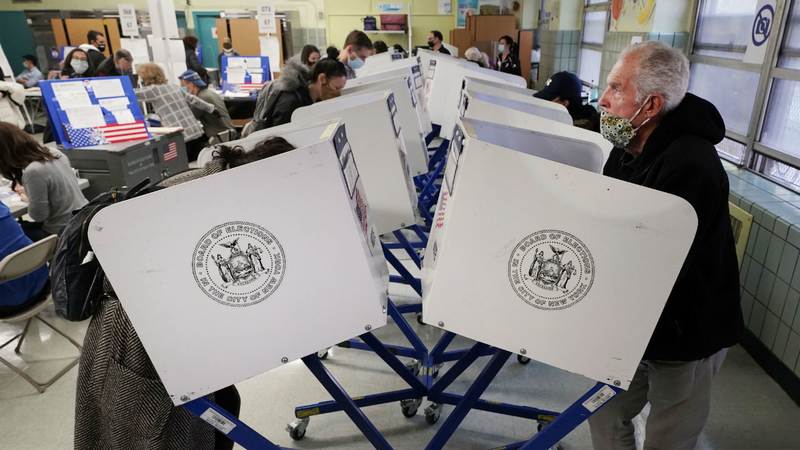 Polls began opening Tuesday as election officials warned that millions of absentee ballots could slow the tallies, perhaps for days, in some key battleground states and as President Donald Trump threatened legal action to prevent ballots from being counted after Election Day.

Tens of millions voted early as cases of COVID-19 surge in a vast majority of states, and those who vote in person are encouraged to wear masks, practice social distancing, and take further safety precautions where appropriate.

The NYC Board of Elections said that as of 5 p.m. Tuesday, a total of 2,161,043 voters have voted in-person Tuesday and during the nine days of early voting.

Lines continued to be long at polling places around New York City.

Meantime in Virginia, supporters cheered and applauded President Donald Trump at his campaign headquarters, where he visited Tuesday to thank dozens of staffers working to get him reelected. Trump predicted his victory, but acknowledged he could lose. "I think we're going to have a great night, but it's politics and it's elections and you never know," Trump said. He said his campaign was doing well in states like Florida, Arizona and Texas. He noted the importance of winning Pennsylvania. "Winning is easy. Losing is never easy," he said. "Not for me it's not."

NEW: "I'm not thinking about concession speech or acceptance speech yet," Pres. Trump says during stop in to address RNC staff in Arlington, VA.

NYPD officers are deployed to all 1200 polling sites in New York City and officers will be out tonight on the streets despite the absence of planned demonstrations.

Police Commissioner Shea called businesses boarding up "100% precautionary" but added "it's hard to fault them with what we went through and what they see across the country."

Cities brace for possible post-election protests as millions head to the polls.

10:30 a.m.
All 1,201 polling sites in NYC are open. Mayor de Blasio said a handful were late to open, but those problems have been resolved.

In New Jersey, Governor Murphy said between 500,000 and one million votes could today be added to the states 3.5 million votes cast so far in the state's mostly mail in election.

"We have had huge turnout with very few issues," he said.

In New York City, NYPD officers removed a 'Trump or Communism' sign across from a polling location at 213 West 58th Street in Midtown. No electioneering is permitted within one hundred feet of a polling place.

No major voting problems were reported, but long lines were evident at some New York polling places.

So I thought the lines wouldn’t be as bad on Election Day because so many people voted early. Boy, was I wrong. I’ve never seen anything like this. pic.twitter.com/QBZ4NGm7iQ

Here's what you need to know about voting in across the Tri-State Area.

At least 2.2 million cast in-person ballots early, despite hours-long waits in some cases, along with more than a million voters who have already returned absentee ballots. Those 3.3 million votes are nearly 42% of the total vote in the 2016 presidential election.

Absentee ballots must be postmarked by November 3 to be counted. All other voters are expected to vote in person on Tuesday.

Related: When will we know the winner of the 2020 presidential election? These are the 3 likely scenarios

The NYPD has promised beefed up security for the election, and Chief of Department Terence Monahan said that ensuring the safety of all voters is a top priority.

Officers will be posted at all 1,201 polling stations around the city. Currently, there are no known threats in connection with Election Day.

Still, many businesses were boarding up windows ahead of any potential unrest regarding the outcome of the race for president.

Rep. Peter King's LI swing seat: Republican U.S. Rep. Peter King's impending retirement after nearly three decades as the aggrieved voice of New Yorkers has set off a scramble for control of his suburban Long Island swing district, with outside groups pouring in millions of dollars. King's chosen successor, State Assemblyman Andrew Garbarino, faces Democrat Jackie Gordon, a retired U.S. Army lieutenant colonel who moved to the U.S. from the Caribbean island nation of Jamaica when she was 7. Green Party candidate Harry Berger could split the vote, which is expected to go to one of the two major party candidates. Republicans are fighting mightily to keep the seat, situated in an increasingly diverse swath of the island's South Shore. President Donald Trump narrowly took the district in 2016.

Zeldin vs. Goroff: Further east on Long Island, three-term Republican U.S. Rep. Lee Zeldin faces a challenge from Democrat Nancy Goroff, a Stony Brook University chemistry professor seeking public office for the first time. That race has centered on the candidates' disparate views of Trump's response to coronavirus, as well as the Black Lives Matter movement. Zeldin, an Iraq War veteran and U.S. Army Reserve lieutenant colonel, praised Trump's handling of the pandemic as "phenomenal" during a speech to the Republican National Convention. Goroff has aired campaign ads accusing Trump and Zeldin of ignoring health experts' guidance. She pledged to "use science and facts to guide us out of this crisis."

Related: How your vote in the 2020 election still makes an impact in a non-battleground state

Maloney vs. Farley: In the Hudson Valley, fourth-term Democrat Sean Patrick Maloney is squaring off with Republican Chele Farley, who suffered a landslide loss two years ago when she took on Democratic Sen. Kirsten Gillibrand in a statewide race. Maloney was New York's first openly gay member of Congress when he was first elected in 2012. The district, which covers Orange and Putnam counties and parts of Dutchess and Westchester counties north of New York City, is one of a few in the U.S. where voters favored Trump in 2016, but picked a Democrat to represent them in Congress.

Rose vs. Malliotakis in New York City's only Congressional swing district: The candidates for Congress in New York City's only swing district are slugging it out in a contentious campaign, one that directs much of its fury at a man who isn't on the ballot - Mayor Bill de Blasio. The second-term mayor and one-time Democratic presidential hopeful is deeply unpopular in New York's 11th Congressional District, which includes the borough of Staten Island and part of Brooklyn. First-term Congress member Max Rose, a 33-year-old Army veteran who is still a captain in the National Guard, faces off against Nicole Malliotakis, a 39-year-old state Assembly member who is running with Trump's support. The race is expected to be close.

Each of New York's 27 congressional districts are up for grabs this year, as are the 63 state Senate seats and 150 seats in the state Assembly.

Ballot Questions
New York has no statewide ballot questions in 2020.

Voters in New Jersey cast 3.5 million early votes ahead of Election Day, more than 88% of the total turnout in the 2016 election.

The state is conducting a mostly mail-in election due to the pandemic, but at least one polling location will be available in each municipality for in-person voting on Tuesday. Polling hours will run from 6 a.m. to 8 p.m.

Governor Phil Murphy saying that he's confident that they will have a good handle on things come election night. The votes are already being counted, though the tallies won't reveal until election night.

Anyone who goes to the polls on Tuesday can either drop off a mail-in ballot or fill out a provisional one -- which gets counted last. Going into an actual voting booth is only reserved for a few.

"The only people that can vote in the machines in the polling locations are those who are not physically capable of filling out a ballot with a pen," Bergen County Clerk John Hogan said.

Related: Here's why early election results may be misleading

In addition to the president, voters will be electing a U.S. senator and their U.S. House representative.

Key Races
Sen. Cory Booker vs. Rik Mehta: Polls have shown the Democratic incumbent, U.S. Sen. Cory Booker, with a double-digit lead over his Republican challenger, Rik Mehta. Pundits have predicted there's little likelihood of the former Newark mayor losing to Mehta, a political newcomer with an accomplished background including a law degree and a doctorate in pharmacy. Booker is a well-recognized figure, whose failed run in the most recent Democratic presidential primary had him under the national spotlight for months. Mehta is new to the political game and is the founder of biopharmaceutical firms. He lives in traditionally Republican Morris County with his wife and three children, while Booker lives in the Democratic stronghold of Newark in Essex County, with his partner, actor Rosario Dawson.

Party-switching Congressman vs. Democratic challenger: Former New Jersey Republican Rep. Jeff Van Drew and Democratic challenger Amy Kennedy are squaring off for the 2nd District House seat. Van Drew is seeking his second term after becoming a Republican over his opposition to Democrats' impeaching President Donald Trump, and Kennedy is seeking office for the first time. Van Drew was elected in 2018 but switched parties because he opposed the impeachment of Trump, and his embrace of the GOP led to an Oval Office meeting with the president during which he pledged his "undying support." Kennedy is a former public school teacher and the spouse of former Rhode Island Rep. Patrick Kennedy.

Battle of the Toms: Incumbent Tom Malinowski is facing Tom Kean Jr., the minority leader of the NJ State Senate, in the state's 7th District, which includes all of Hunterdon County and parts of Warren County. Malinowski beat then incumbent-Republican Leonard Lance in 2018, flipping the district from red to blue.

Andy Kim vs. David Richter: First-term Congressman Andy Kim's seat in the 3rd District is up for grabs, with Kim significantly ahead of Republican challenger David Richter. The district spans Burlington and Ocean counties.

Ballot Questions
New Jersey also has three ballot questions: legalizing recreational marijuana, delaying the legislative redistricting if the Census is delayed, and giving a property tax break for veterans who served during peacetime.

Related: What is voter suppression? Tactics used against communities of color throughout history, in 2020

In-person polls open are open from 6 a.m. to 8 p.m. on Election Day, and same-day registration is available in town halls. CLICK HERE to find your polling location.

CLICK HERE for more information on voting in Connecticut.

Key Races
Connecticut has five Congressional districts, with all seats currently held by Democrats that are favored in their respective races.

Ballot Questions
There are no statewide ballot questions in Connecticut in 2020.